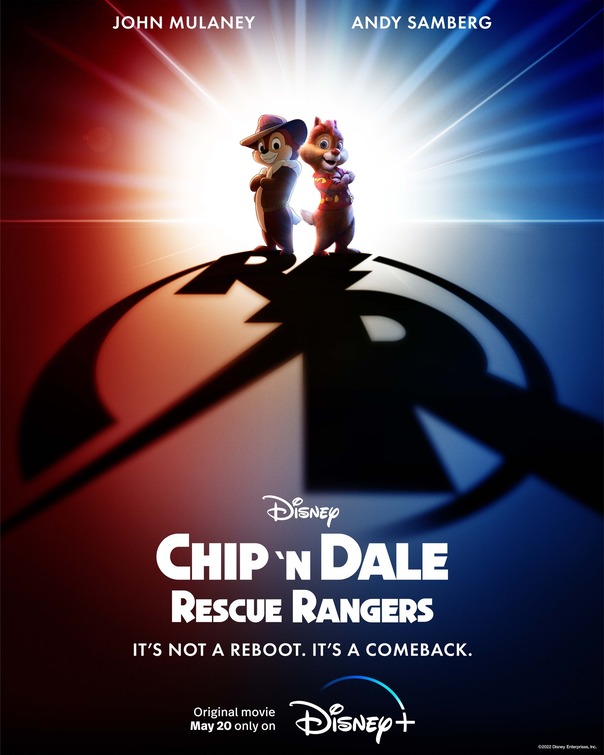 The late eighties and early nineties were a gold mine for animated Disney shows. You had Tailspin, Darkwing Duck, and of course Ducktails which always made me want to know the feeling of diving into a pool filled with gold coins. Before all of those though was The Rescue Rangers, which focused on the adventures of the world’s most famous chipmunks that didn’t have a Christmas hit going for them.  Now they have been brought back to entertain us once again, as they try and solve a case that affects them and their friends.

After season three of their hit series The Rescue Rangers, an opportunity got in the way, and Chip (John Mulaney) and Dale (Andy Samburg) went their separate ways. With that spilt a friendship that had gone back to their days at school was thrown away and looked to be lost forever. Fast forward some years later and now Chip is selling insurance while Dale is living off of nostalgia conventions with a slew of other stars of the past. They have not talked for years, but when Monterey Jack (Eric Bana) has fallen on hard times because of his stinky cheese addiction, he calls them both for help. Chip and Dale are still estranged, but when Jack goes missing and word on the street is that Sweet Pete ( Will Arnett) has Jack for the debt he owes him. Chip and Dale start to see the need to solve the case and with the help of a human cop named Ellie (KiKi Layne)  they start to look into what happened to Jack. Soon they discover that Jack along with some other toons have gone missing and are being “bootlegged” , but lucky for them The Rescue Rangers are on the job.

Written by Dan Gregor and Doug Mand Chip ‘N’ Dale : Rescue Rangers  wants to be Who Framed Roger Rabbit?  so bad, with its idea that cartoon characters are actors in the real world.  Much like that film it focuses on a central mystery with humans and toons working along side each other, but it lacks the heart that Roger Rabbit had. This however is not just some half–assed attempt to copy Roger, no there is some clever ideas in this one, they just don’t get time to grow. With the series taking place in the late eighties when hand drawn animation was the way, having Chip get the new “CGI” surgery was pretty funny. The problem is for what good we get, we also see that it doesn’t think enough of itself and it throws as many Hollywood IP’s as it can in its runtime, not as bad at Space Jam: A New Legacy but it’s close. When the IP’s are out of the way there is actually a funny buddy comedy buried in there, as Samberg and Mulaney bring a decent amount of laughs.  I do think this could have been something special but if you like playing a nostalgic “I-Spy” game, then you are going to love this. For the rest of us, hey at least Chip ‘N’ Dale are back, I just hope the next time we see them we will get a little less fluff and a bit more fun.