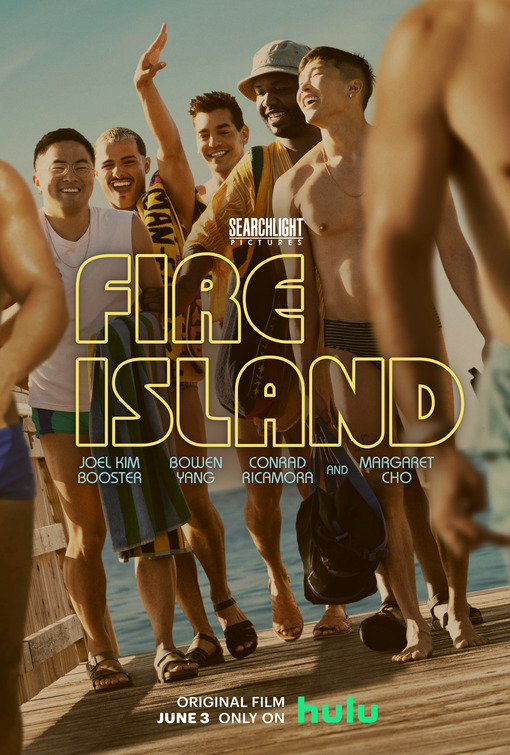 Everyone at one time or another has had some sort of fun filled vacation with friends. Those times always stand out in your memory because they always end up being what’s called “the best of times”. Fire Island  at its core, is a celebration of friendship as a group of friends get together for their annual trip to the island where anything goes. The days seem to move just a little slower as the guys escape to Never-Never-Land and deliver the perfect welcome to summer movie.

In this modern retelling of Jane Austen’s Pride and Prejudice, we find Noah (Joel Kim Booster) waking up and hurrying  to the docks to catch a boat to Fire Island. On it his group of besties have been waiting for him, including Howie (Bowen Yang), who has moved across the country and who Noah cares the most about. While it is all about the fun on the island, Howie never seems to take full advantage of it, so Noah makes it his mission to get Howie laid durning this trip. Once on the island, they meet with the last part of their group and also their host Erin (Margaret Cho), who informs them that this might be their last hurrah, as she has to sell the house they stay at. After getting over the disappointment it is time to have some fun and is Noah’s first chance to help Howie out. Things get off to a very promising start when Howie notices Charlie (James Scully) checking him out from across the room. After an impromptu introduction  you can see some sparks fly between the two. With Charlie is his friend Will (Conrad Ricamora), who doesn’t seem like he approves of Howie nor his friends. Things though are never easy and Noah overhears something that forms his opinion of Will and what he and his friends think of Noah and him. What follows is a week of judging that after clarification becomes the most unexpected week any of them thought they would have.

Written by Joel Kim Booster, who wears many hats as he also stars and serves as the films narrator, tells a story that does not try to play down what it is about. As Booster’s story has heart, it is Andrew Ahm’s direction that sets the tone and he lets the characters be completely open. Too often it seems movies play down the “gayness” of its gay characters, something that does not happen here.

Fire Island is an entertaining good time with a non-stop barrage of one liners that will supply many laughs. While this might be a great showcase of Booster’s talents and he does so much, It is Yang who as Howie steals the show. The rest of the ensemble is great and together they remind you what friendship stands for. Even though it is not all rainbows and bare chest dancing, the conflicts never feel forced as they come off very organic and relatable. Fire Island is just a good rom-com that you are sure to have a fun time with. With its upbeat tone and party soundtrack it’s a movie everyone can have a gay old time with.