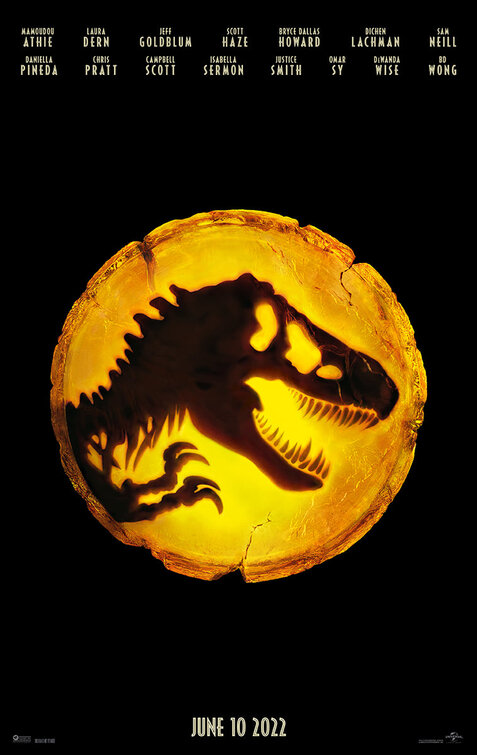 Twenty nine years in the making and five films before it, we have come to the conclusion of the Jurassic World trilogy. After all of the watching of humans trying to control dinosaurs to no avail, you figure that Jurassic World Dominion will be the one in which they finally learn their lesson. Unfortunately for us and and even more so for the film’s characters they do not learn that lesson and once again dinosaurs are trying to rule the earth, or at least another island.

Of course after the events of Fallen Kingdom where someone had the bright idea to bring dinosaurs to the mainland, we need get to live among them. Don’t worry though humanity finds a way to make things worse as they start selling dinosaurs on the black market and illegally breading them. At the same time this is all going on Owen ( Chris Pratt) is playing dino coyboy and Claire ( Bryce Dallas Howard) is an dinosaur activists all while living in a remtoe cabin in the middle of nowhere. The remoteness is mainly because of Maisie ( Isabella Sermon), who Owen and Claire are hiding from people who are looking for her. Meanwhile there are other problems besides just dinosaurs roaming the earth, that would be giant locusts whose swarms are wiping out the world’s grain and corn supply.

Enter Dr. Ellie Sattler ( Laura Dern), who is trying to figure what is going on and thanks to an old friend she has a tip on what is happening. She though cannot do it alone and seeks out Dr. Grant ( Sam Neill), who of course agrees to help her. Together they head to an remote island, where a company has set up a refuge for the dinosaurs, and we all know what good comes with that combination. Once on the island they meet with Dr. Sattler’s source, who is Dr. Malcolm ( Jeff Goldblum) as they once again try and fix a mistake involving dinosaurs.

With a story by credit from Derek Connolly and a screenplay written by Emily Carmichael and Colin Trevorrow, the latter also directing, Jurassic World Dominion goes out of its way to give you nothing new. Besides being unoriginal, the script is lacking in any substance and really pulls down the movies entertainment value. Now you might think that could be hard about making a movie that has dinosaurs in it? Especially with a Universal budget, yet Trevorrow and Carmichael find a way.

Having already sat through the other letdowns that were Jurassic World and Fallen Kingdom  my bar was not set too high for this one. Somehow though it still fell short. This film is way to bloated and could have shaved some of its runtime. Everything though is not bad, the original cast members are fantastic and if it was just them, this might have been a more enjoyable experience. Even with the inclusion of the OG cast and plenty of dinosaurs they could not save the movie from itself. It has been a steady decline since the first Jurassic Park graced the screen some thirty years ago, ending with what is the worst entry into the franchise. I hope they figure out something better for the next chapter, or even try to get back to what made the original so great because these last few films deserve to be on the extinction list.