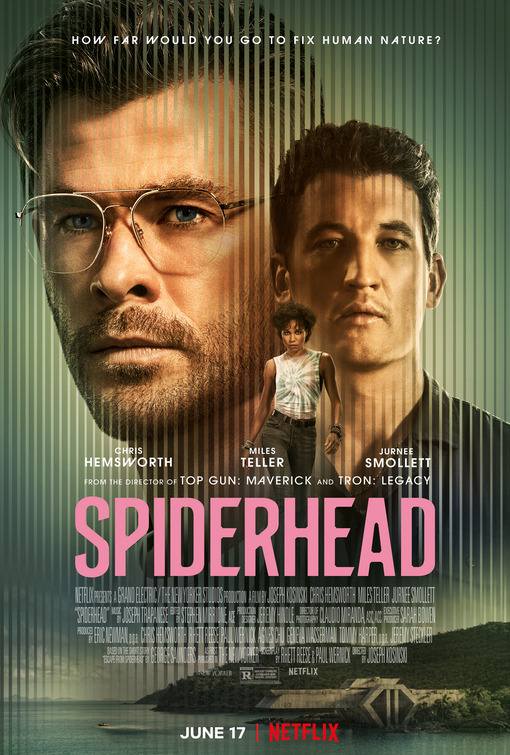 There are many things that don’t go together, but yet somehow we always try and make them work. I am sure you can think of some examples, but for me there is one that stands out, and that’s scientist and an island, because those things never work out well. The Island of Dr. Moreau and Jurassic Park are perfect examples of this and now we have Spiderhead  trying again, this time science and an island are mixed with criminals, I mean what could possibly go wrong?

What is Spiderhead you night be asking, well it is a place that convicts can choose to go to instead of serving time in a regular prison. There is of course a catch and that is that they are volunteering to be medical subjects for a new drug. Although they are guinea pigs they do get quite a bit of freedom and this place is a lot nicer than a regular prison. It is run by Steve Abnesti (Chris Hemsworth), who along with an assistant conducts experiments on their guests that Steve hopes will lead to a Nobel Prize. Jeff ( Miles Teller) seems to be someone they are keen on as they use him often, something Jeff seems pretty indifferent about. The experiments involves a machine on your lower back that administrates dosages of different drugs in order to give the desired effect that Steve is looking for. All of this leads to a variety of results, which are not all good. As for Jeff  he has little interaction with anyone other than Steve, but he has made a connection with Lizzy ( Jurnee Smollett), as the two of them seem to be getting pretty close. That bond will be tested, and possibly pushed to the limit.

Written by Rhett Reese and Paul Wernick from a George Saunders short, Spiderhead is a clever screenplay with an audacious premise. It definitely will cause you to give some thought to the moral limits of experiments like this. Of course most might be onboard as you think that it’s for the greater good, but as you’ll discover Steve’s real reason and his lack of bother for the consequences of his experiments it may lead you to believe something else. There are some twist and turns in this film and it doesn’t always navigate them as well as feels irregular at times and keeps the movie from reaching it potential.

Spiderhead  might have its problems, but they don’t get too much in the way of the main characters. Hemsworth looks to be having a grand ole time and once again gives us a taste of what we will get when he has more time to make movies like this. When it comes to Smollett and Teller, they are both grounded in their performances while also  being emotionally committed. Add those performances with a great soundtrack and you have something that works for the most part. I hope finally this will teach us not to give a crazy guy control of an island where experiments are performed.  That might help humanity but would for sure make movies more of a lonely island.