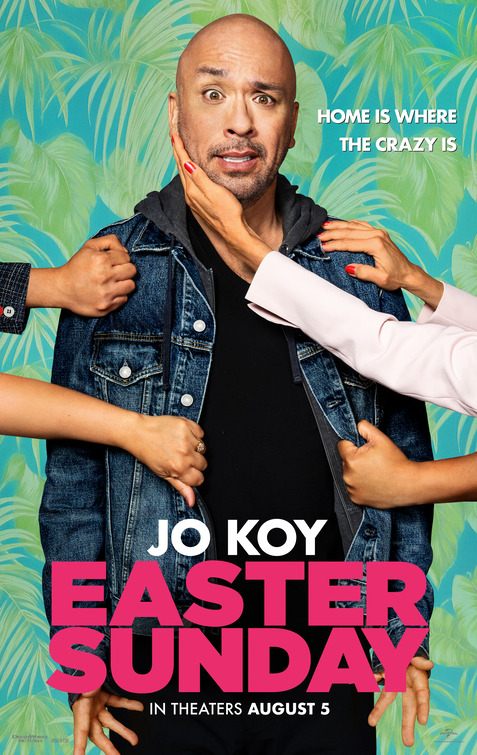 At one point the sign that you made it as a stand-up comedian was that you were given your own TV show. Things like that will happen after a comedian had the biggest show on TV for years called Seinfeld .While they may not be handing out TV shows like they used to, if you are big enough you could always get a movie. Jo Koy has a pretty large fanbase so there is no question that he is loved,  but does his comedy translate to the cinema world.

Koy plays Joe and and with a giant leap his character is a stand-up comedian. Unlike Koy in real life, Joe is sort of successful having only made a name for himself but having a catch phrase in a beer commercial he did. There is a chance to land something, but after a recent audition he has to return home as his mother Susan ( Lydia Gaston) is guilt tripping him to come home for Easter. Joe is always on the go and because of that he misses a lot of his son Junior’s life, but after not doing so well at school, he uses the trip home as a good time for some father/son bonding. It is once back home where the movie starts to take off, thanks to the many characters that fill out Joe’s family. For them Joe is the smooth talker who always seems to be able to smooth things over, so when his mother and Tita Theresa ( Tia Carrere) are fighting, it is up to Joe to get them to come back together. That is not the only drama that is happening, there is also Eugene ( Eugene Cordero) who took money that Joe had invested for a taco truck and made it a hype truck instead. Joe’s money wasn’t the only investment and the other investor wants his $40,000 now or things might not end well. Needless to say drama is the word of the day with this Easter and all while Joe is still trying to land the role of his life. Written by Kate Angelo and Ken Cheng the story line is heavily inspired from Koy’s on personal life and stand-up routines. Everything from the food, to the petty squabbles between family members that have scored Koy a legion of fans is in here, there just isn’t enough of it.

Easter Sunday has some funny moments and really shows off the talent that is in the Fillipino community.  Unfortunately even that talent can’t save the movie from its flaws, that really weigh down the picture. While those things don’t make Easter Sunday  less funny, they do clog up the flow of the narrative. There are too many side stories and the bland visual palette and weird rhythm of the editing all hurt the movie more than it helps. For Koy fans, you won’t be disappointed as this is made for you and the filmmakers know that and make sure Koy shines and you see people enjoy his act. When you add the excellent supporting cast that includes Carrere, Tiffany Haddish (who slays it) and the great Lou Diamond Phillips, who plays himself. It is the performances that save Easter Sunday from itself as everyone conveys a sincere enthusiasm they try to bring. Not every comedian’s work translates well enough to be a movie, for Koy fans you will enjoy, but everyone else might find it lacking just a little.