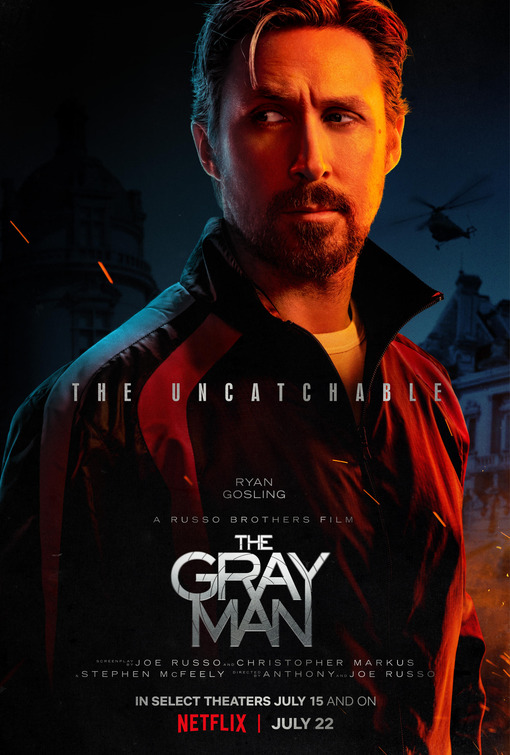 I have always been told by others that I see things in black and white instead of looking in the grey. I assume it would be then possible for me to see the men that lay in the grey areas, this is something Joe and Anthony Russo (Avengers: Infinity War/Endgame) plan on helping all of us with their new release The Gray Man. Based on the popular book series by Mark Greaney, the Gray in this case in a group of operatives who live in the shadows and do the things that require no attachments in life.

Six (Ryan Gosling) is one such operative and you might ask where do you find disposable/dangerous people? Well, prison of course. A man name Fitzroy (Billy Bob Thornton), who has the misfortune of being under one of the worst wigs, recuts these men and unleashes them out into the world. Years later most of the men in that group have either flamed out or died, but even though Fitzroy has retired, Six is still killing it. His latest operation is to kill a man in Bangkok with the help of another operative named Dani Miranda (Ana de Armas). Of course the job goes a little sideways, because Six refuses to have a kid become collateral damage , but being the machine he is, he still gets his man in a pretty explosive way. It is before his mark dies that he is told and given something that will lead Six to wander off the path he has stayed on for so long. Because of this decision he becomes target number one and Lloyd Hansen (Chris Evans) is called in, a man who has no rules, other than to get his target.

With the screenplay by Stephen McFeely & Christopher Markus, and Joe Russo, The Gray Man is not one of those twist around every corner spy thrillers. The story is secondary to the action set pieces and in those The Russos chose to go big instead of going home. The action sequences are a sight to see, even though some of them are difficult to make out because of edits and shadows, yet you still get the idea of what is happening. By the time we get to the climatic face-off between the two leads, Gosling’s Six has been put through the wringer, but lucky for us he never loses his sense of humor and can still deliver some snarky dialogue.

In a world where we have both Bond and Bourne, The Gray Man  fits nicely in that world with its large action sequences and big stars who shine big. Gosling and Evans are both fantastic with the latter looking like he is having more fun than he should be having playing bad. The rest of the cast lead by de Armas is also great as she is really on a hot streak when it comes to her chosen roles. While the movie does look good and the use of drones makes for some great shots, it also leans a bit heavy on CGI, which does detract slightly. As an action movie The Gray Man will leave an impression, in spite of it sometimes hiding some of the strong stunt work and action choreography. I for one had a great time with this and would welcome a new franchise with Gosling in the lead and hope The Russos might learn from the few mistakes they made with this one. Those mistakes aren’t enough to detract and when it’s all over, you too will be happy you looked at the grey.