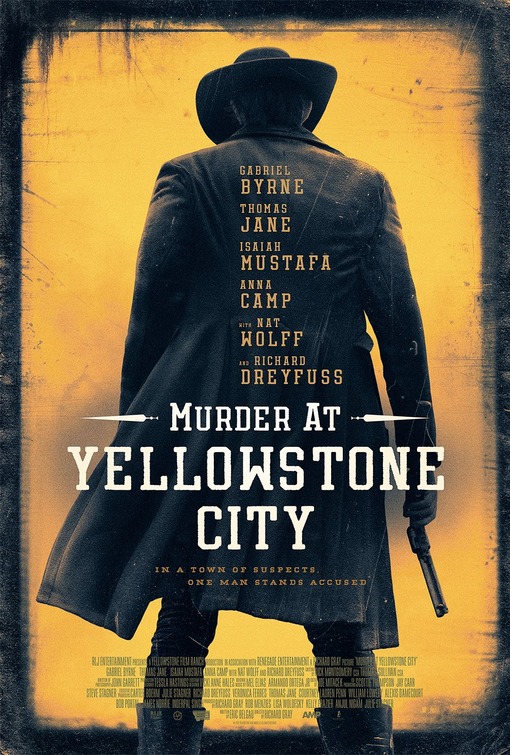 Westerns always seemed to me like a pretty straight forward genre to make. You had a good guy and you had a bad guy and after a story filled with buildup it would all end in a big shootout. Yes, I know I’m leaving out a lot of the nuances that make westerns so good, but for this I am just summarizing the basic story. Now here comes Murder At Yellowstone City  and as you can tell, from the title, something wicked has come the towns way and unlike my summarization, it is not that simple.

Yellowstone is not what you’d call a bustling town, in fact some might call it a dying town. That could be changing though, when one of its residents finds gold in them there hills. Of course with riches comes greed and someone has killed the finder of said gold. Without much investigation and most of the evidence to the contrary, Sheriff Ambrose ( Gabriel Byrne)  pins the murder on a stranger who has made his way to Yellowstone named Cicero ( Isaiah Mustafa). Ambrose actually seems like a pretty stand-up guy and the situation with Cicero just seems to fit him. Not everyone in the town though is satisfied with the swift justice, mainly the preacher (Thomas Jane) and his wife Alice ( Ann Camp) who believe Cicero is innocent. Eventually Alice is able to help Cicero escape, but boy is that timing bad, as another murder happens and the fingers are pointing even harder at Cicero when he is captured. Meanwhile, there are more townsfolk who are doubting he is the murderer which soon has them picking sides. Ambrose is trying to do his best to keep the peace, but with the preacher and his lot begging for him to release Cicero and the others wanting him hung, it can get tough. Things get worse before they get better and after another murder we get the shootout that this town is never going to forget.

Written by Eric Belgau and directed by Richard Gray, Murder At Yellowstone City lacks more than what it delivers, as the movie makes a tumbleweed’s life look exciting. The scenery is striking and the cast is good, I mean you have Thomas Jane, Gabriel Byrne, and Richard Dreyfuss, but that is not the problem. Where it lies is in the predictable story and the editing or should I say the lack thereof. It appears they kept in, what I can only assume is everything they shot, and even when you get to the final standoff, you are just hoping it will end soon.

I really wanted to get behind this movie, unfortunately I just can’t. While the main characters do just fine, the bit players are not at all charismatic and are not helped by the clunky dialogue that have to spit out. Add the cleanliness and newness that Yellowstone City has, it is hard to feel like this town has ever been lived in. All of this though could have been forgiven if you were just in this for 90 minutes, but we are on this train for over 2 hours, so it’s easy to start to pick it a part. Murder At Yellowstone City  is the kind of western that gives other westerns a bad name and gives the saying “ there is nothing to see here”  true meaning.