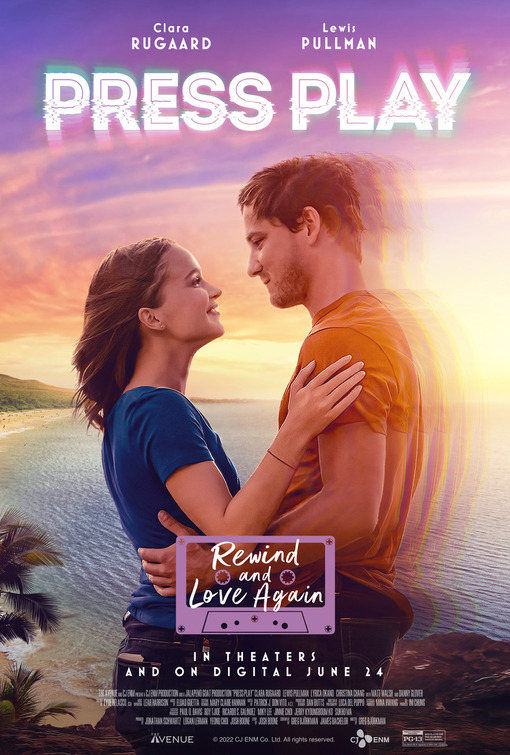 Back in the day when you wanted to show someone how you really felt about them, there was only one way to do that. Sure you could write a letter or send them something, but that was only for if you didn’t really want to tell them how you really felt. That true way to deliver your feelings was to make a mix tape, which in of itself was considered by some as true art form. For Laura (Clara Rugaard) and Harrison ( Lewis Pullman), their mix tape they made together is about to give new meaning to the term “taking you back.”

Laura and Chloe (Lyrica Okano) are besties, and when someone has a cool step brother that you think will be perfect for your friend, you set that up. That’s exactly what Chloe does as she introduces Harrison to Laura and well as they say, the rest is history. Soon Laura and Harrison are spending all their time together and Harrison is even changing his school plans. Life seems like a fairy tale, but soon it turns into a nightmare when Harrison is killed while crossing the street. Laura and Harrison’s family are devastated, but life moves on and we find a different Laura four years later. This Laura has clearly lost something inside and while it seems everyone else is coping, she is still having her problems. One day though she finds the mix tape her and Harrison were making and decides to listen to it. While for everyone else pressing play will take you back in your memories, but for Laura it actually takes her back in time. Disorientated at first, she realizes it is real and sets out to save Harrison from his future. She has five songs to do just that, as each one takes her to the time when they heard that song together for the first time.

Written by James Bachelor and Greg Björkman, the latter also directing bring some clever ideas to the whole time travel movie universe. Using music as the key for the ability to time travel feels like one of those ideas that screams “ why didn’t I think of that!?” With that good idea in hand, you only hope the filmmakers will deliver on the premise. There are for sure things to like about Press Play  which includes the soundtrack and the locations, which are throughout Hawaii. With beautiful scenery and music as its backdrop, Press Play only has to make you feel something with its story, something it mostly does.

The ideas are exciting and while there are some weakness in the script, it mostly leaves things resolved. There is charm to spare, but while Rugaard and Pullman are quite good, the rest of the supporting cast, which includes Danny Glover doesn’t pull their weight. That is not too bad though, I mean the story really isn’t about them anyway.

Press Play  is a love story with a twist and two leads that will have you believing they are star crossed lovers. While there might be a few logic problems and a score that doesn’t really feel like it fits, these are things you can overlook. There is enough here for you to enjoy which makes this one worth your time either in the future or in the past.