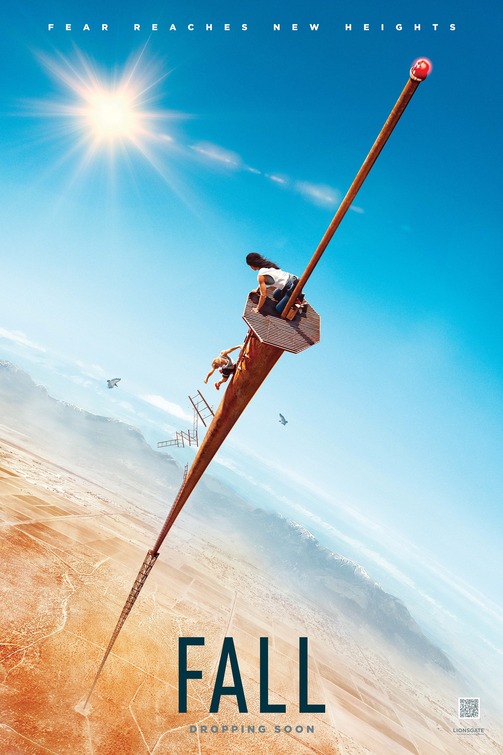 I have never really been scared of heights, but with that said, I do have a thing about climbing ladders to ridiculous heights. Needless to say the events of Fall would never happen to me, because when I see a 2000 foot tower with a ladder on it, my words are not just ‘nope’, but ‘hell no!’. Well two people who didn’t say ‘no’ are Becky (Grace Caroline Currey) and Hunter (Virginia Gardner), as climbing this tower fits perfectly with their “living life” moment that they are in.

Becky, her husband Dan, and Hunter were climbing a mountain side where an accident cost Dan his life. A year later Becky has given up mountain climbing for binge drinking and leaving messages on what I assume is an unlimited voice mail to Dan. Becky has pretty much cut everyone out of her life, which includes her dad ( Jeffery Dean Morgan). After a low night a ghost from the past in Hunter reappears and she convinces Becky to climb a TV tower in the middle of the dessert. At first she refuses, but eventually gives in, which is safe to say will be a decision she will regret making very soon. After grabbing a little grub, Becky and Hunter head for the tower. While Becky is a little hesitant, Hunter is all gung-ho as she has gathered quite the following with her stunts like this. A normal person would have stopped before even thinking about climbing as the tower’s good days look to be far behind it.

As they start to climb, Director Scott Mann, who co-wrote the script with Jonathan Frank highlight some of the towers flaws, setting up what you know is a disaster waiting to happen. When they reach the top it’s Miller time, as they celebrate by taking some good pictures and spreading Dan’s ashes which Becky brought along with her. For a movie shot in one location getting to the “top of the mountain “ moment has taken its time and has taken a predictable path something that will not change through its run time. Instead what can go wrong does go wrong, as Becky and Hunter are given the Swiss army knife of bad luck. And by the time we get to the end, you don’t know if you should root for them to be rescued or just to leave them up there.

There is a lot of frustrating things going on in Fall, things that just don’t make sense. The biggest one is that Becky and Hunter appear to be experienced climbers, yet they tell no one of their plan to climb a 2000 foot tower in the middle of nowhere. This is not the only stupid thing they do, but without these choices there would be no movie, as they would have been rescued rather quickly. Fall  as an idea is clever, but its plot reveals and motives are telegraphed and have been seen in many movies before it. Having a run time of 1 hour and 47 minutes did this movie no favors, as a trimmer version of this might have been a marked improvement. There are some moments that will give its viewers some thrilling experiences and for someone like me moments of stomach turning as they dangle so far up. Fall ultimately is one high-wire act that peaks at its premise.