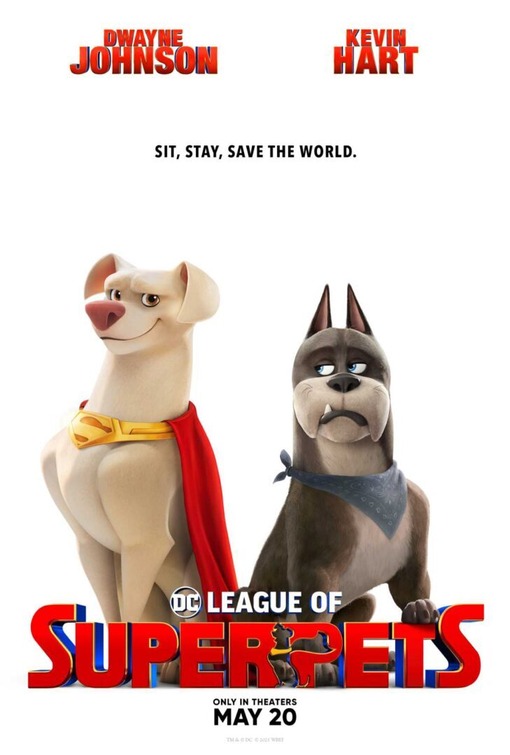 Able to lift his owner to force him to walk and to catch a squawky toy in a single bound, Super-Dog is here to save the say. Ok so this is not the story of Super-Dog, because well that is just too on the nose name wise. Instead this is a story about Krypto (Dwayne Johnson) and his most humbling experience at the hands of a guinea pig.

Krypto is not just a dog who is any man’s best friend, he is Superman’s best friend. Having traveled with him from Krypton, he and Sups have saved the world more often than not ,while still getting in plenty of walking time. Superman though is getting pretty tight with Lois Lane (Olivia Wilde) which is making Krypto feel a little left out. While Krypto and Superman work out their problems, Lex Luthor (Marc Maron) is trying to carry out an evil plan to rule the world (spoilers, it doesn’t work ) as he is stopped by the Justice League once again. Somewhere at a pet shelter though LuLu ( Kate McKinnon), a guinea pig who has been waiting for her moment finally gets it and with the help of orange kryptonite she becomes someone who can rule the world. As she leaves to do her plan, the collateral damage is that a group of pets in the shelter also get super powers. They include Ace (Kevin Hart), PB (Vanessa Bayer), Chip ( Diego Luna) and a turtle named Merton ( Natasha Lyonne) who just wants her leafy greens. LuLu though with her army of super guinea pigs has already taken out the Justice League and now she has her sights set on releasing Lex Luthor so they can rule the world together. Krypto, who is now powerless because of some cheese with a hidden danger inside it, teams up with the other super animals as they try and save the world before it falls to kibble and bits.

Written by John Whittington and Jared Stern, (Lego Batman Movie) her give us a pretty predictable story, but hey it’s not where you are going  but how you get there. The ride does have its share of bumpy spots (sometime feeling too mechanical), but thanks to a great supporting voice cast it makes up for a lot of those problems. Everything of course leads up to a big super fight and with it, its  expected outcome everyone, including the audience has found a few new best friends.

DC League of Super-Pets is pretty fun and for the most part keeps a great tone throughout. While you might have come to see super pets and Johnson and Hart, it is the rest of the cast you will want to stay for. I love the clever jokes at the defense of films like Justice League and even A Nightmare on Elm Street as the writers are clearly having fun. When you add this to how great most of the film looks, only some of the visuals feel a little dull (specifically some of the justice league characters) you are left with a much lighter version than most DC films do. Even though it tries to play the serious role a little too much and a run time of 106 minutes, DC League of Super-Pets  has enough going for it that if you have a tail you would be wagging it.