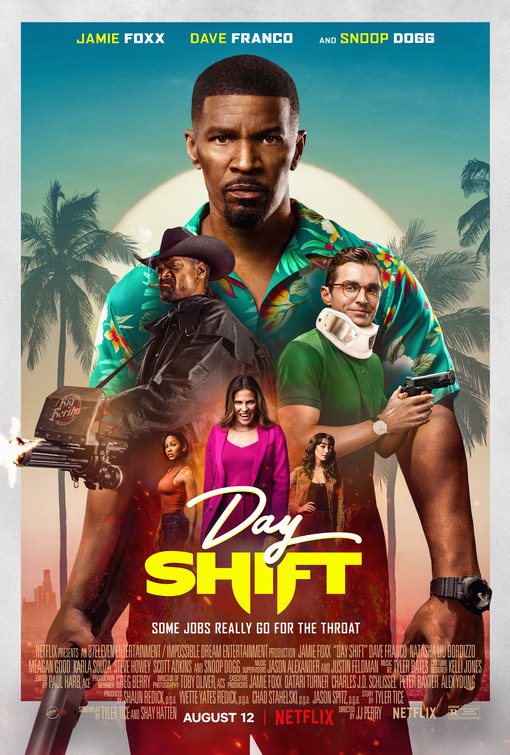 There are only so many angles you can come at a story in order to keep it feeling fresh. Case in point, even before movies had color or sound, they have told the tale of vampires. After so many movies, you kind of know the drill. I mean, we all know the OG story, as well as seen half human and half vampires kill other vampires, hell we even saw one being interviewed. Needless to say we have pretty much seen it all, but writers Tyler Tice and Shay Hatten have come along and given us something new, and take that fresh feeling to another level.

Bud (Jamie Foxx) to his family is a very unreliable pool guy, who seems to be up to things other than what his job suggests. Unbeknownst to his wife Jocelyn (Megan Good) and his daughter Paige (Zion Broadnax), but knownst to us, it’s not pool filters Bud is clearing, instead he is clearing the world of vampires. Bud is not a lone gunman, “vampire killer” is an actual job that has a union and a whole lot of rules that Bud seems has a hard time abiding by. It is that reason Bud works outside the system, but when a situation arises that requires him to make some money fast, Bud has to call in a favor to get back into the union. His inside man is “Big” John Elliott (Snoop Dogg) who convinces them to give Bud one last chance. Of course there are strings attached in the form of a union representatives named Seth (Dave Franco), who has been instructed to document every rule Bud breaks. It seems though that Bud might have pissed off the wrong vampire as has killed one that meant something to one with some power. Now, not only is Bud trying to get paid, he is also being hunted, which will set up a confrontation that will not suck at all.

Directed by J.J. Perry,  who for over thirty years has worked as a stuntman as well as a stunt coordinator, proves to be the right man for job based on the superb action he displays here. Perry who has worked on a slew of great projects, including John Wick, which you can see a lot of in the action scenes which are highly choreographed to the point where you think you are watching a ballet, but with blood. While the fight scenes are a blast to watch, it’s not all fist and feet and there is plenty of other more explosive action. It all leads up to a grand finale, which takes place in and under a mall with a conclusion that will make you feel like a vampire in a blood bank.

Day Shift  is exactly what it you think it is, a kick-ass helluva good time. Fox is great in both the action and providing some laughs, but most of the comedy comes from Franco who has pretty much taken the title of “best” Franco. You didn’t come for that though, and fans of John Wick and Blade will have their appetites whetted by the gory action. I had a grand old time with Day Shift  with my only regret being I didn’t see it with an audience or a group of friends. I didn’t think you could make a vampire movie interesting and new, seeing as how as characters they have been on film for almost 100 years, but Perry and crew have proved me wrong and delivered a killer flick.