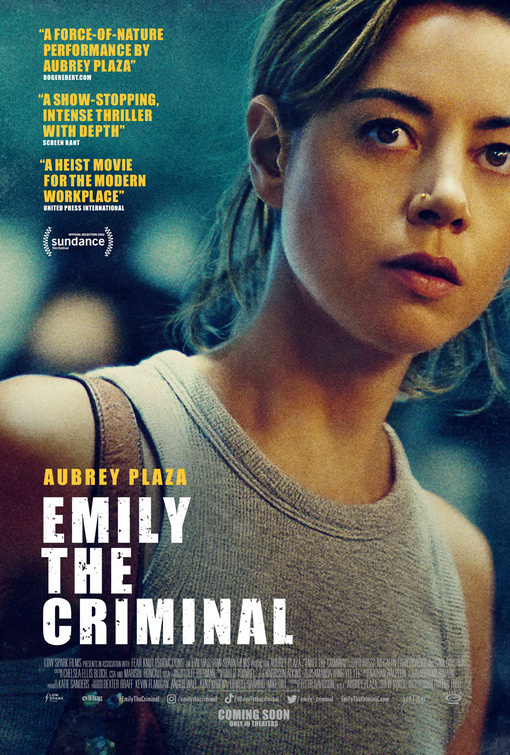 If you are like most American’s you are probably swimming in ocean of debt and no matter how hard you try you can never find the shore. What if though you were given an opportunity to put a dent in that debt, but it was a little illegal, ok a lot illegal, would you do it? That is the proposition that Emily (Aubrey Plaza) is given in Joh Patton Ford’s new film Emily The Criminal, which from the title you can safely say is the opportunity she takes.

Emily is definitely behind the eight ball when it comes to the tune of $70,000 worth of debt that she has accumulated. The current job she has is just paying the interest and anytime she tries to get something better she is denied because of a past criminal record. Now you might say she did the crime and now she is paying for it, but the crime she did was out of self-defense, should she still be paying for that? Emily is up against it, but that is about to change after she picks up a shift for a coworker and he gives her a number that she can make an easy $200 doing something for. Knowing it might be a shady, Emily doesn’t want to at first, but circumstances change and she texts the number and is given an address to be at. Once there she discovers the job involves stolen credit card numbers, all she has to do is make a purchase with one of the cards and the $200 is hers. Emily gives into the devil on her shoulder and does the deed, because $200 is $200, but when she is done she discovers how easy that was and wants to do more. Soon Emily, with the help of Youcef (Theo Rossi) who was the point man on the first job is doing her own cards. Everything seems to be rolling, but whenever you go in the deeper water you always have to worry about bigger fish and Emily might have bitten more than she can chew.

Written and directed by John Patton Ford in his feature debut, he beautifully portrays a person with nothing to lose and everything to gain. The film is relentless from its opening scene, as the film doesn’t let up until the stress induced finale. You know Emily is making bad decisions and each time it looks like she has learned her lesson she ends up leaning more into it and I am here for that.

Emily The Criminal  doesn’t hide the trajectory of the story, as it’s right there in the title. Where the ride is, is how she gets keys getting deeper and deeper. Plaza, who already has cornered the comedy market as being one of the ones you can call to bring he all, is now doing the same in the drama world. Plaza makes Emily’s transition into the criminal world credible and she is phenomenal playing the no-nonsense role. Not only does she kill it in her role, but her chemistry with Rossi, who excels playing her mentor and her eventual romantic interest is strong. Emily The Criminal  is a sexy and dangerous thriller while being a shrewd portrait of a lost soul searching for meaning and finding it in illicit activities. It just cements that notion that Plaza is one of the best, no matter what she decides to take on and will have you rooting for this anti-hero all the way home.