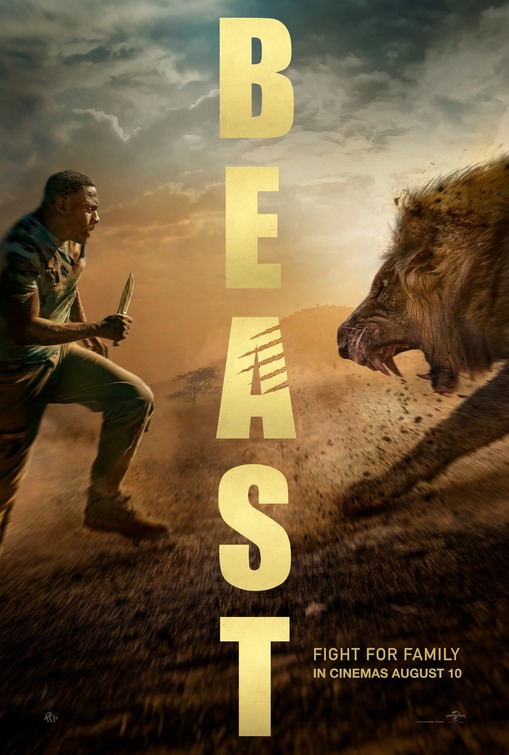 In the jungle, the mighty jungle, the lion sleeps tonight, well not in this jungle. No, this jungle has one pissed off lion that treats this jungle like an all you can eat buffet. Directed by Baltasar Kormákur. Beast or how it was probably pitched: “Jaws in the Savannah”  is a classic animal versus man, that doesn’t end well for a lot of men.

Dr. Nate Samuels ( Idris Elba) is bringing his daughters Norah ( Leah Jeffries) and Meredith ( lyana Halley) to South Africa where their mother, who had just recently passed, was from. After many connecting flights they arrive near the village she was born and are met by Martin (Sharlto Copley), who was a colleague/ friend of both Nate and his late wife. After a night of relaxing and quite a bit of alcohol between Nate and Martin, they wake up and take the girls to see the Savannah. Meredith, like her mother, is an aspiring photographer and is loving the natural beauty she is experiencing.  Most of the wildlife they see is in passing, but Martin soon stops to get an up-close look at a pride of lions, who two of them he helped raise as cubs. After a cute show of affection, they are all off again to explore, but soon they come upon a scene that worries Martin.  It looks like the work of poachers, so they head to a village nearby to see if they know anything. What they find there is worst than the scene before and Martin quickly turns around to head back home, but an encounter with a wounded man is about to change everything.

With a story by Jaime Primak Sullivan and the screenplay by Ryan Eagle, Beast is not a complicated story, as it’s more about tension that plot. That’s not to say there is no plot, it just that isn’t what is going to make or break this movie. There are some complicated family dynamics, as Meredith has some anger issues with her father over him not being there for her mother. Kormákur really takes advantage of the great landscapes and at time you feel like you are watching a National Geographic documentary with a really good looking guy in Elba. The scenery is a fundamental part of the narrative that makes Beast at least a beautiful movie to watch.

Beauty is of course in the eye of the beholder and while there are no tigers and bears, oh my is this lion bad-ass. While he might rule any other jungle, this one has Idris Elba, so needless to say this lion is about to have his wok cut out for him. Of course there are no real lions here, as they are CGI, this part Jaws part Jurassic Park  feel of a movie has what you hope it would based solely on the trailer. Not only does it scare and impress, it is also not too shy to show its rawness at times. Beast  does all of this and keeps it simple as it doesn’t bring anything new into the film, but it tells its story well. Even if you know where the story is going,  you are enjoying the ride regardless. There is something to be said about that kind of filmmaking and for me I would be lion, I mean lying if I said I didn’t have a good time.