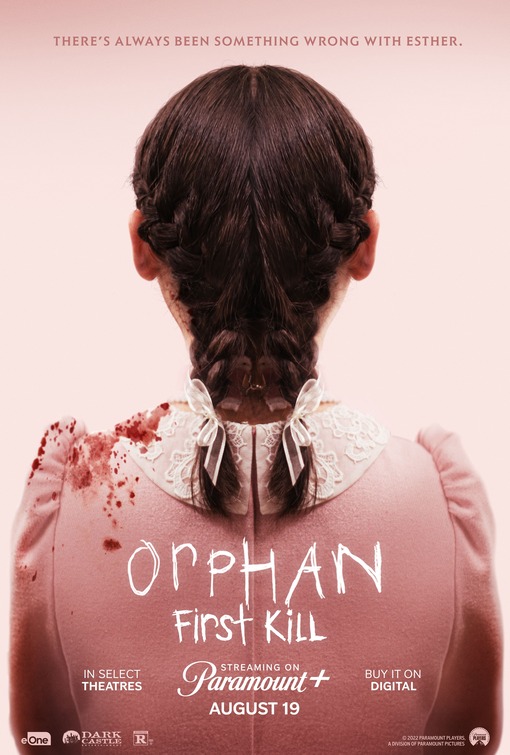 What would make an orphan named Esther (Isabelle Fuhrman) want to be a homicidal maniac?  Some might not remember the 2009 film Orphan, but for those who are fans, we are getting the story of Esther/Leena before she caused all that mayhem in Kate and John Coleman’s life. This story starts in Estonia and once again poor security in a mental hospital is the reason this all started. After escaping that hospital, all while making quick work of some orderlies and the new doctor charged with looking after her, Esther cleans herself up and comes up with a plan.

She decides to pose as a kidnaped child, is helped by a condition that she has that allows her to pose as a ten year old girl. So after saying she is the Albright’s lost little girl, she is hurried back to America where she is going to be reunited with her long lost family. Once in America, Tricia Albright (Julia Stiles) picks Esther up and  brings her back home, a very nice home as money is not a problem for them. Allen Albright (Rossif Sutherland) seems to be the most excited to see Esther as he seems to be happy with some new skills she has picked up, playing the piano and painting. Esther though has some issues, mainly she likes to kill people, so fitting in as the “good girl” is causing some problems. Everyone in the family seems to be welcoming, including Gunner (Matthew Finlan), who after Esther has disappeared became the star kid. Of course having a missing child just show up would raise some flags and Detective Donnan (Hiro Kanagawa) continues to look into Esther, something she is not too fond of. If we have learned anything it’s don’t piss off a killer and Esther will do whatever she has to do to keep her ruse going.

Written by David Croggeshall, Alex Mace, and David Leslie Johnson-McGoldrick, the latter who wrote Orphan gives us a prequel we never knew we wanted. The original filmed worked, because, well child killers always work in horror and as we learned then, there is something wrong with Esther. We did not need a prequel to know that, but nonetheless, I for one am glad we got one. Seeing Julia Stiles getting to play this character and Fuhrman back as Esther is worth the ticket, along with some other things you don’t see coming.

Of course not everything comes up rosy in Orphan: First Kill  as the film slogs along for the for 60 minutes as it plays setup. I know that was deliberate, but knowing that doesn’t make it easier to get through. The reward though is the final act that is more than worth the watch as we get even more evidence that there is for sure something wrong with Esther. The original film’s twist is hard to match, but this one sure tries and all I can say is that not everything will be exactly what you expect.  Orphan: First Kill  never reaches the level of the original film but does deliver a watchable prequel as you never forget her first kill.