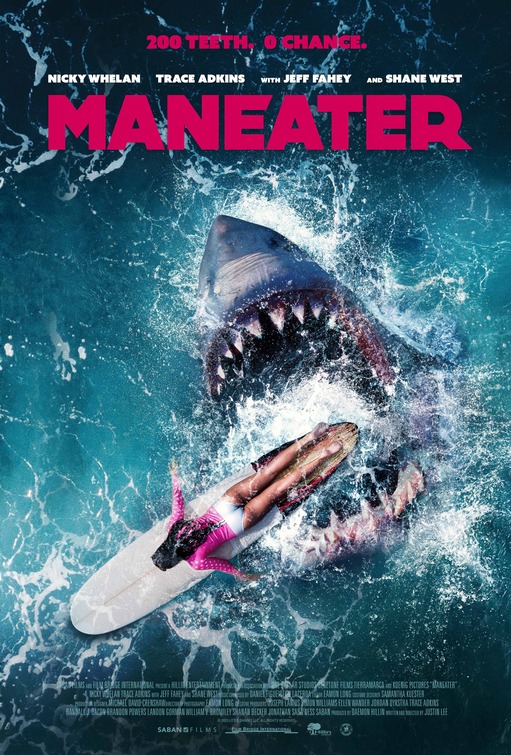 There is a saying that “the true paradises are the paradises that we have lost”. Over the years a lot of paradises have been lost, mostly because of the over expansion of humans and also because of large sharks that eat people. Ok well maybe that last thing is not entirely true, but for the people who are at this paradisiac island, it is definitely not safe to go into the water.

In this beautiful place, where the weather is perfect and the water is crystal blue, you would think that would be helpful if a big shark was in it. Turns out not to be the case when Harlan’s (Trace Adkins) daughter goes for a surf and becomes a shark breakfast. Harlin, who has lived and fished on the island for forever knows that once a shark has a taste of something, it is not going to end well. After a week of nothing being done Harlan gives the local authorities an earful and decides with his perfect sized boat, he can handle it himself. Meanwhile also on the island is Jessie (Nicky Whelan) and her friends who have come to support her on what was supposed to be her honeymoon. Everyone is having a good time, but Jessie is just kind of there, but there are plans that could change her mood. That plan is a cruise on a boat that will take them to a secluded island where Jessie and her friends can enjoy everything this paradise has to offer. Of course their paradise is about to take a turn as that shark is still making meals out of people and he is making his way towards Jessie and her group.

Written by and directed by Justin Lee , Maneater  wanted to be this decades Jaws, but really has more in common with a guppy fish than that classic. Sure the shark makes quick work of its victims and in graphic ways. I mean there is even a bit of practical gore, but it’s not going to keep you out of the water anytime soon . The CGI shark just doesn’t look good and Maneater decided it was in this for the kills and not the suspense leading up to them. When you add that lack of suspense and the not-so-good looking shark, you get a set up for a climax that is a whimper instead of a bang.

Look you can take your pick of things that just don’t work in Maneater, but for me it is so bad it is good. Sure it has bland and unlikeable characters and you have to listen to some pretty corny dialogue, especially from Adkins, who with his trusty hunting vest and shotgun feels like a combination of Captain Ahab and Quint from Jaws. It helps that the film has a 90 minute run time, but that time is not always used to the best of its abilities. We spend a lot of time getting to that island with Jessie and her friends, but the shark makes super quick work of them all, and then bam! Final showdown ( Jessie/ Haran 1 – Shark 0 ). If you are looking for a good shark movie,  you definitely want to throw back Maneater into the water. If entertainment though is your goal, well Maneater  will provide that with laughs, even if they were not intended and some good ideas for drinking games that might call for a bigger glass.