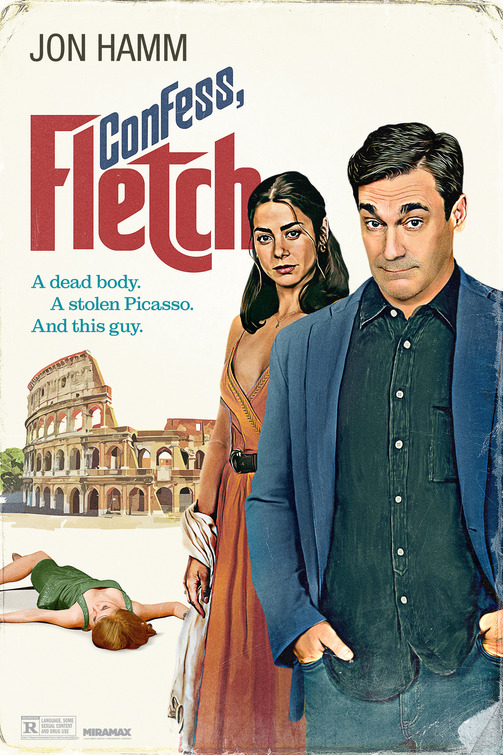 In 1974  the first Fletch  novel was published, written by Gregory McDonald and with it came the birth of a great detective series. For the next twelve years, nine more would be written which would lead to what every good book wants to be when it grows up, a motion picture. If you are a man of my age, when you hear the name Fletch you think of the two Chevy Chase’s films from the 80’s,  Fletch and Fletch Lives, where Chase plays the fast talking reporter admirably.  Since then Fletch has tried to make a comeback, but it took Greg Mottola and Jon Hamm to make it happen.

In this story we find Fletch (Jon Hamm) arriving at a townhouse he is staying at only to find a body of a woman dead on the floor. Fletch, being the good citizen he is, calls the police and endures some questions and of course a little suspicion that he may be the murder. We soon learn what brought Fletch to Boston as his girlfriend Angela’s (Lorenza Izzo) father has gone missing. The kidnappers don’t want money, but instead a painting that is worth twenty million dollars. The problem is, her father’s paintings have all been stolen, but do not worry, Fletch is on the case. Which is what brings him to Boston and in that home that faithful evening. Of course you can’t really investigate anything with the cops following you, so Fletch finds creative ways to lose his tail. Detective Monroe (Roy Wood Jr.) and his partner Griz (Ayden Mayeri) who does all the leg work have pretty much zeroed in on Fletch as the prime suspect. Fletch though has a job to do  and it involves an art dealer (Kyle MacLachlan), his old editor Frank (John Slattery), and even a Countess (Marcia Gay Harden), all who are possible suspects, well except Frank, who just wants money Fletch owes him.

Adapted by Zev Borrow and Mottola, the latter also directing, beautifully wields the punchy dialogue that had made the Fletch novels so much fun. This version of Fletch is full of great lines and quite frankly might be one the of best comedy scripts of the year. Snappy dialogue is not the only reason for that claim as there as some great gags, most notably a scene with Annie Mumolo that gets into some serious “high” jinks. Although the comedy is what makes this movie shine, there is also a mystery to solve and it will make you break out you best deerstalker hat and pipe as you try and put all the pieces together before our hero does.

Fletch as a character can be a difficult mountain to climb and there are not many actors who could pull him off, hence the possible reason we haven’t seen him on screen in over 30 years. Chase did it so brilliantly, but Hamn is perfectly suited to play this version of Fletch. Although the consummate underdog, he is also strangely one step-ahead and in Hamm’s hands he plays his strengths and weakness perfectly. I had my worries, after all I thought I had lived through a peak performance of the character already, but I was wrong, as two people can both play one guy at its peak. I for one hope that this is the start of a new franchise, as Hamm has never been funnier and Confess, Fletch is frankly a comedy gem that will only get better with repeat viewings.

See How They Run