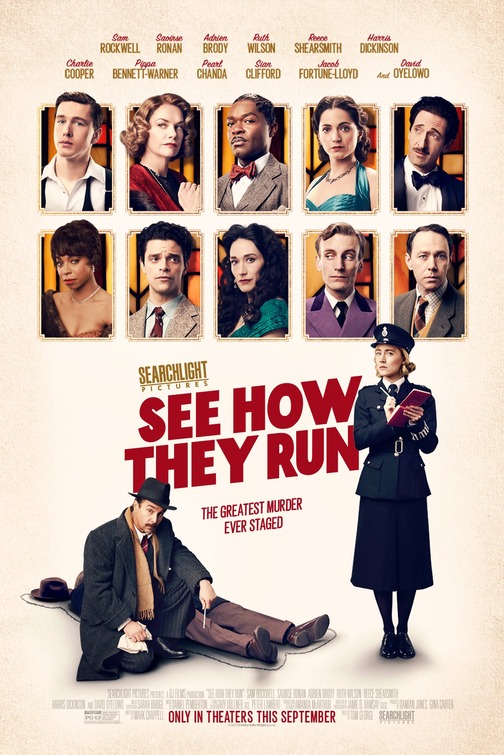 It seems with the success of Kenneth Branagh’s run of playing Hercule Poirot and Rian Johnson’s Knives Out the whodunit is back in style. It is between these movies and the popularly of true crime podcasts that it is safe to say there are more amateur sleuths than ever before. Now entering the arena is See How They Run, which is quite simply a murder mystery that takes place during a production of The Mousetrap, which was written by the great Agatha Christie, but is a lot less complicated than how that sounded.

On the night of it’s 100th stage production of The Mousetrap, a great party is thrown to celebrate. Everyone involved with the production is there, including the filmmakers who plan to turn it into a motion picture. Of that group the one who stands out is director Leo Kopernick (Adrien Brody), who is not the most well liked guy in the room. When he is not fighting with he writer, Mervyn Cocker-Norris (David Oyelowo) over adding a shoot-out at the end, he is  getting in arguments with men over hitting on their wives. The argument tonight is with the star of the play Richard Attenborough (Harris Dickinson) over the treatment of his wife Sheila Sim (Pearl Chanda). After a little scuffle, Leo retreats to look for a change of clothes where his days of skiing too close to the edge comes to an end, when he is murdered. Any good crime deserves a good detective with a plucky partner, enter: Inspector Stoppard (Sam Rockwell) and Constable Stalker (Saorise Ronan), who are on the case. Together the pair start going through the suspects, which includes the above mentioned as well as the future film’s producer John Woolf  (Reece Shearsmith). Written by Mark Chappell, See How They Run  does a good job of freshening up the tried and true tropes with a bit of humor that is very meta. Chappell also fills the film with a lot of nods to real life events and people as a lot of what is going on, minus the murders, is true. Some of those references will be missed, but there is plenty of time to catch them in repeat viewings. Although definitely not lacking in smarts, the energy level, other than that of Ronan’s, feels a little low. Thanks though to the brisk run time, that lack of energy doesn’t bring the film down too much and delivers an ending that would make Leo proud.

See How They Run  never plays like it is trying to remake the wheel, but instead feels more like cinematic comfort food. There is plenty of fun to be had and is pretty breezy as it shows its influences loud and proud. The story might bend the rules some, but it never goes far enough to break them. The ensemble cast of characters alone are worth the admission, as you should never need a reason to see Rockwell and Ronan in any film, let alone a whodunit. Murder is never good, but in a story told the right way on solving of said murder can be a riot.  See How They Run  is a very satisfying and a great excuse for all you amateur detectives to solve another case, while having a good time in doing so.