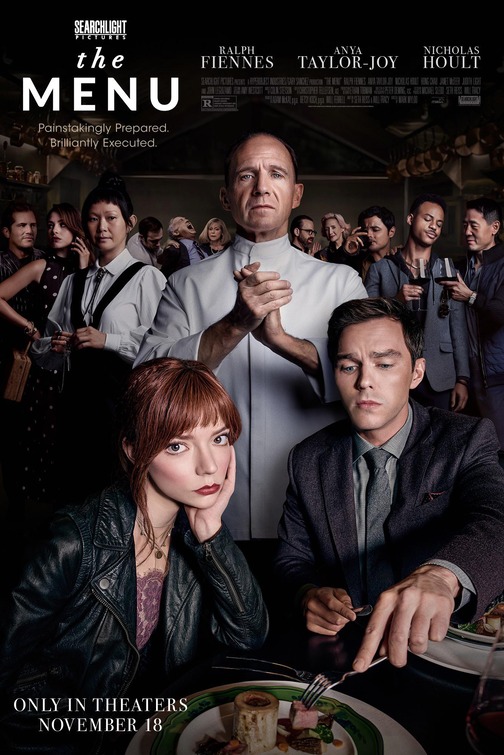 Raise your hand if you have ever been to a seven course meal that was an experience just as much as a meal (raises hand). My experience involved me eating things I never thought I would and coming away knowing I would eat few meals like I just did. Needless to say The Menu looked straight up my ally, with its sinister vibe that went along with a culinary experience that looks absolutely like food to die for.

Chef Slowik (Ralph Fiennes) has made quite a name for himself in the food world. He is the owner of an exclusive restaurant that people line up and pay $1,250 just to say they have been there. Tonight’s group is in for a special treat, as it includes some regulars, a food critic, a serious foodie, and someone who is was a last minute invite. They are all taken via a boat to an private island, where Chef Slowik and his team take things very seriously. When they all arrive, they are met by Elsa (Hong Chau), who takes them on a tour of the place before bringing them to the main dining room. Once they are seated they are presented with a show, as each dish that is served comes with a story to accompany it. At first the food takes center stage, but soon things turn and the guests get quite the surprise. Everything about the evening has been planned, except for the foodie named Tyler  Nicholas Hoult), who brought an unexpected guest in Margot (Anya Taylor-Joy). Soon everyone is going to get a lot more than the food they came for.

You get the feeling that writers Seth Reiss and Will Tracy are enjoying their rock throwing at the world of extreme wealth and the high end restaurant excess. It though is not all fun, as they also give the brilliant cast some of the most delicious dialogue of the year. With a supporting cast including John Leguizamo, Judith Light, Janet McTeer, and Reed Birney. Tracy and Reiss give everyone plenty to chew on, but the juiciest parts are delivered by Taylor-Joy, Fiennes, and Chau, who is really the stand out with her performance. As the dishes proceed, Chau is given the opportunity to say things most people in the service industry would love to say to the most difficult of customers. With everything coming together so well, director Mark Mylod, with his first film in over a decade (he’s been doing great work on TV with Succession and Games of Thrones), is the perfect added ingredient to put this menu in its rightful place.

The Menu at its core can easily be read as a statement about culture and that of the high end culinary experience. Although there is no doubt that most of these people you would not want to spend much time with, it is still hard not to feel a little something for what they are going through. The food is not the only thing that boils, as there is no shortness of tension. This particular menu feels perfectly put together with its dark comedy and Fiennes is a role that no one else could have ever played but him. I can promise you that you will savor ever second of The Menu as this is a full course meal that will surely leave you full.