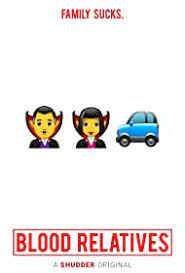 Telling a vampire story can be a difficult task, as so many have been told already. That is why when I heard about Noah Segan’s new film Blood Relatives, I was really intrigued with what he was planning on bringing to the screen. The story of a vampire’s life being turned upside down from a daughter he never knew existed.

Francis (Noah Segan) is a pretty down low vampire. He often spends his days sleeping in his car that is covered by a tarp and driving across country at night. Though he is unaware that he is being followed by someone who has seen him cleaning up after dinner. That person is Jane (Victoria Moroles ), a fifteen year old girl who has been looking for Francis. He finally confronts her, and finds out that a night with a girl some years ago is what brought Jane into this world. Jane has her father’s thirst and strength, but she can walk in the sun, even if it requires a lot of sunscreen. Francis, who dresses like the vampire version of the Fonz, enjoys his nomadic lifestyle and is not really looking for someone to tag-along. So he agrees to take Jane to her only living relative. It is along the way that Francis gets to know Jane, even teaching her how to drive as well what the differences that human vs. animal blood does to their kind. As much as they seem to bond, that life Francis lived before is the only way he thinks he should live and is not sure if should be changed.

Some of the fun with Blood Relatives is in the way Segan messes around with the well established vampire mythology. Sure he can be killed by the sun, but if he lives off animal blood, he loses his hair and gains weight. The film is also a great road trip movie, bringing all the great conversations that come with it and as well as the conflicts. It is easy to buy into those conflicts, as you have someone who just found out he is not alone in this world and that verses his current lifestyle have some complications. It was also easy to buy into the need for these two lonely people to get to know each other, as they are really the only thing they have in the world. This is a vampire movie though, so while it is charming and funny, it can also be a pain in the neck for the not so lucky.

I really enjoyed the lightness that this movie had, as it is unapologetic in its warmth. It has a lot of heart and is clearly a passion project for Segan, even if it may be, at times clumsy, you can tell it comes from a place of love. Segan and Moroles are both great so you don’t mind spending the time with them, as their relationship feels very believable. I enjoyed this idea for a vampire movie, one finding a lost daughter, when It feels like he should roam the world alone. I think you will as well, and while not perfect, I think many will find it perfect for them.