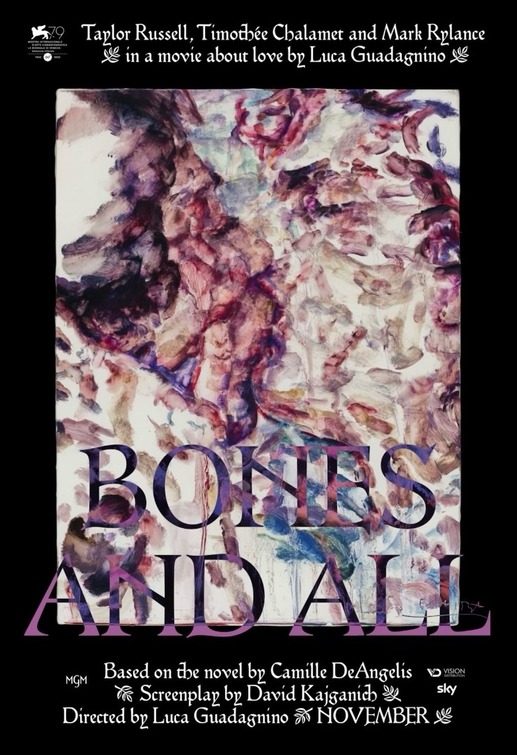 Everyone needs love in their lives and thanks to movies we have pretty much seen that love is possible, for even the scariest of monsters. After delivering one of the better love stories that is Call Me By Your Name it seems Luca Guadagnino was ready to deliver another story that proves you often don’t find love, but instead love finds you.

Maren (Taylor Russell), is the new girl in school who is in the need of friends. Knowing this, one of the other students invites her to a sleepover to help her make some. An obstacle in Maren’s way is that her dad (André Holland) locks her in her room at night, for reasons that you will discover. At first it looks like just four teenage girls doing sleepover stuff, but it quickly takes a turn after Maren eats a finger off one of the girls. Scared, she runs back home where her dad and her grab what they can and they are soon gone as fast as they arrived. Having this not being the first time, her dad has had enough as Maren wakes to find him gone and she is left only with her birth certificate. After hoping on a bus to look for her mom she is found by Sully (Mark Rylance) at her first stop, who is an “eater’, as he calls it, like her. He takes Maren back to a house where he had found a woman near death and was waiting for her to die to satisfy his cravings. It is while they are waiting for her death that Sully teaches Maren how to use her nose to seek things out and tells her other rules for survival. After dining on the deceased woman, Maren flees, feeling that something is off about Sully. Only to meet Lee (Timothée Chalamet), another eater and together they hit the road to try and find their way in this crazy world.

Written by David Kajganich from Camille DeAngelis’s novel, Bones and All  is a gothic love story that carves its own way. Although the path Lee and Maren takes seems familiar, it has unpredictable outcomes, as they both try and control their urges as well as navigate their feelings. At its core it is a love story that is told through Maren’s perspective, as she looks for someone who can tell her a solution to why she has the urges that she does. It is through her and Lee’s travels in the heartland that she realizes that no one may have the answers and that she will have to look within herself to find them.

Bones and All  soars at its world building, as we learn the method to the madness that is the eaters. They live on the fringe of society as they seek each other out as each follows their own set of rules to survive. All of this works mainly because of the performances by Chalamet and Russell, the latter really showing that even more great things lie ahead for her. Bones and All  is a movie you can really sink your teeth into because everyone loves a bloody good road trip movie. When you mix in some gory horror with a teen romance, you can’t help but eat it up.