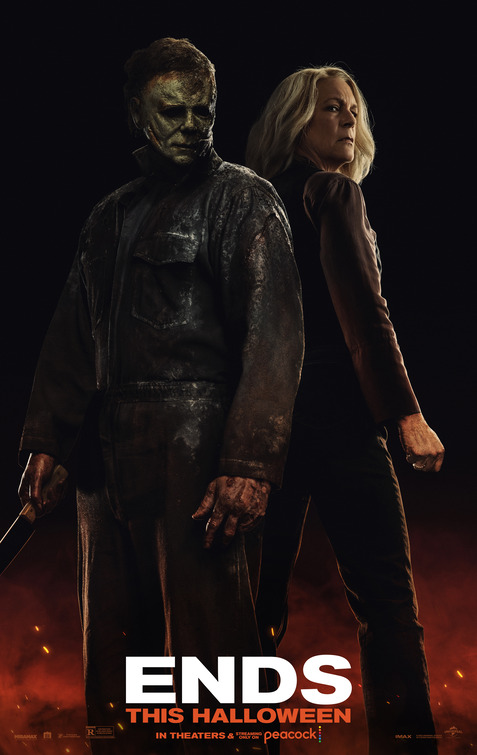 Much like the sun coming up, you can always count on a killer from a horror franchise to come back. Michael Myers is a perfect example and after 7 movies he had lost some of his bite for mainstream fans. That changed in 2018 when David Gordon Green breathed new life into the O.G. slasher and made people take notice of the bogeyman once again. Now after a follow-up where evil didn’t die, we get the final showdown between Laurie Strode (Jamie Lee Curtis) and The Shape (James Jude Courthey/Nick Castle) that will end it all.

It has been four years since the town of Haddonfield rid themselves of Michael Myer , but how do you move on from that? For Strode she has cleaned up and decided to write a book about her life and while her granddaughter Allyson (Andi Matichak) looks good, she seems to be searching for something. She finds it when she meets Corey (Rohan Campbell), who accidentally killed a boy he was babysitting a few years ago. Now an outcast, Strode comes to his rescue when some teenagers are bullying him, as she feels a kinship with him in the way the town treats her. Being a good grandmother she takes Corey and introduces him to Allyson, thinking they would be good for each other. That kindness though starts to fade when she notices a change in his eyes, a look she has seen once before in The Shape that has been chasing her for the last forty years. Allyson though sees something different in Corey and he seems to ignite a desire to burn down everything around her. While this is happening, people in town are beginning to die again, as The Shape is back and Laurie may be only one to stop it.

Written by Paul Brad Logan, Chris Bernier, Danny McBride, and David Gordon Green, Halloween Ends  tries to take some big swings with some ideas that don’t really hit. Although the first chapter in this trilogy felt like a classic slasher movie, the last two have seem to care more about what they say than what they do. What is also lacking is the tension and really any sort of clever kills, which can make or break a film like this. It feels like Gordon Green was going for more brutality in some cases, but in this instance, brutal did not equal good. With the chances it takes, Halloween Ends  will either work for you or not, unfortunately for me it didn’t and it made me glad that this one had “End” in the title.

There are some good things about Halloween Ends  with most of it dealing with Curtis, who is a certified bad-ass, and the score by John Carpenter, which is magic a usual. That is about all for me, as it lost me as soon as I realized the direction it was going and for the amount of time it took to get to the reason we all show up for. The good news is that reason, while a little short, does live up to what you wanted it to be, but they had to take it to a place that quite frankly just disappointed me.  I hoped the trilogy would end as good as it started, but for me Halloween Ends  just let me down, but I’m sure there will undoubtedly be a return to Haddonfield during Halloween, we probably won’t have to wait that long.