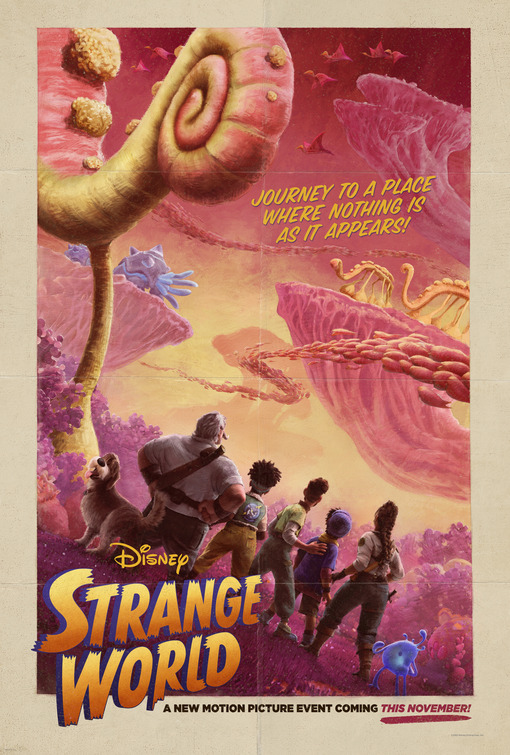 Even with its retro sci-fi and classic adventure feel, Strange World is definitely more style over substance as it delivers an all to predictable story.

Growing up it often felt like an event when a new Disney animated film came to the theater. It was a time when you saw the movie more than once in a theater and a thousand more times when it came out on home video.  Now you got so many different ways to watch these movies and the theater is just one option, but that is not the only problem. Instead of new stories, we just get reboots and sequels, which is kind of why I am excited to get something original in Disney’s new adventure Strange World.

Deep behind the mountains lies Avalonia, a peaceful place that is also home to the great explorer Jaeger Clade (Dennis Quaid), and you know explorers are going to explore. So Jaeger sets up an expedition, to find what is on the other side of the mountains, but he is not going to do it alone. Included in his team is his son Searcher (Jake Gyllenhaal), who doesn’t really want to be an explorer, but he also doesn’t want to let his dad down either. After a grueling first part, Searcher discovers a unique plant and decides he has had enough and that this plant deserves some studying. Jaeger is not having it and stays on course, only to never return again.  Fast forward some years and that plant Searcher found has changed Avalonia and he is now a father himself. He runs Clade Farms with his wife Meridan (Gabrielle Union) and his son Ethan (Jaboukie Young-White)  and everything is just splendid. Good times never last though and soon a problem occurs in the plant that Searcher had discovered all those years ago and he is needed to help solve it. You see the plant powers Avalonia and if they don’t figure out what is happening they will literally end up in the dark ages. So Searcher has to take another adventure, one that could change everyone in Avalonia’s life for good.

Strange World  is pretty standard Disney, in which it creates a world where conflict is overcome and everyone gets along. Written by Qui Nguyen, there ends up being a lot more style than substance and the film never really gives you enough time to savor the emotional beats. Even as Nguyen tries to have you take away the messages from the film, unfortunately some of those messages feel forced and while they don’t completely take away from the story, they also don’t move it forward either.

Strange World really feels like a love letter to retro sci-fi and pulp adventures, but with too much focus on the eye-candy. The movie looks fantastic, but the narrative makes you think more about what they could have done over what they did. Most of the characters are not memorable and as much as I hate to say this, it appears Disney has not yet gotten out of the rut it has been in with its movies lately. With that said though, Strange World is still worth seeing, as it does have that old classic adventure feel to it, however it is a lot less strange and a bit more familiar to what’s come before.