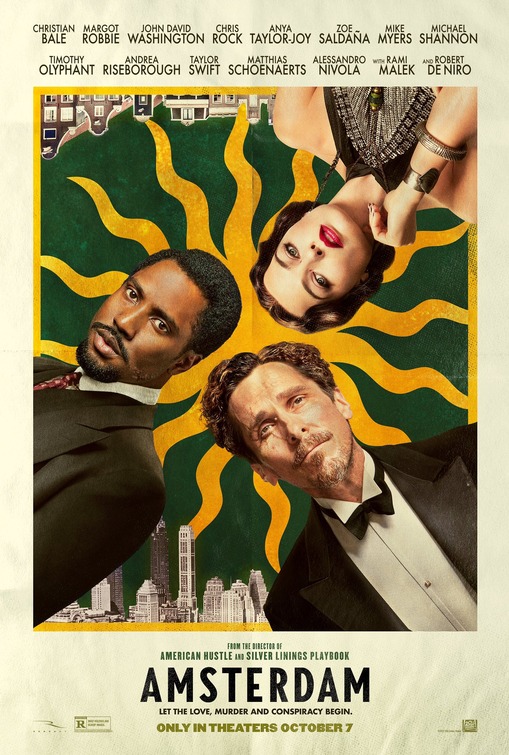 There are times when you are with a group of friends and you start to tell a story, only to be distracted and lose track where you were. That is what I would like to believe happened while David O. Russell was writing his new film Amsterdam, which suffers from a lack of focus and restraint.Although that might not always be a bad thing, but it is when you have a movie that has a lot of moving parts that are supposed to all add up to a big finish. The good thing is, there is a good movie in there, let’s just hope you are better at finding it than I was.

It is during World War I that three friends would meet, who would form a kinship that some of us may never find. It starts when a Doctor named Burt Berendsen (Christian Bale) is put in charge of a all-black regiment that Harold Woodman (John David Washington) was part of. Being this is a war and such, both men are injured and it is there they meet Valerie (Margot Robbie), who is a nurse who helps mend their bodies and souls. Soon the three of them find themselves in Amsterdam, where life is enjoyed by the three of them, until Burt insists he must return home to his wife and a life that awaits him in New York. Some 12 years later, Burt is summoned by Harold to help in a case, of what is to be believed foul play in the death of their old commanding officer. It is after they start to dig around that bad things start to happen, including the death of that officer’s daughter, in which Harold and Burt are blamed for.

Russell who wrote and directed, starts the movie with the statement “a lot of this really happened”, but you just wish he found a better way to let us know. His script is very convoluted and even though Russell’s trademark snappy dialogue is there, it too often feels that it is at an awkward pace and a little frantic. The dialogue isn’t the only thing frantic, as the movie feels like a mixture of ideas that never really come together. What does shine is the cast, who lead by Bale, who always goes all in, do their best to make their way through the fog that can be this script.

I really wanted to like Amsterdam more, but I just feel like Russell could not get out of his own way. The script could have been tighter and had a more focused story which would have done wonders. I don’t think the cast was wasted as not only did Bale stand out, but you got some of the better performances in years from both Robert De Niro and Mike Myers. Amsterdam also looks fantastic with its era-specific costumes and production, but looks are not everything as you will soon rediscover. There is enough in here for this to be a watchable movie, but will there be enough for most people with its over two hour runtime? For me this one time was enough, as I appreciate the work that the actors put in, I just wish I could appreciate the rest as much.