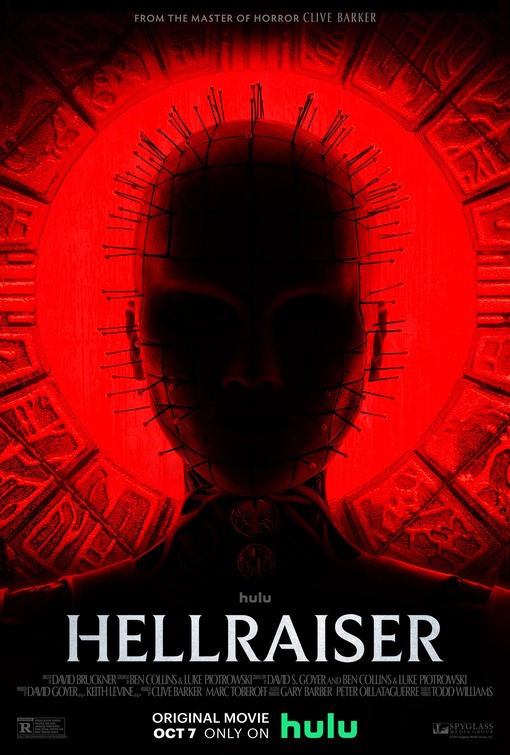 It is safe to say this year has been stellar for Horror, and I am not talking about everyday life. No instead I am talking about the horror films that have been released in both theaters and on streaming services. With all the new frights and thrills we are getting, it is only fitting that one of the classics is dusted off for a new telling. Horror fans don’t need an introduction to Pinhead or really anything Clive Barker has done, but for a new generation, hold on to your socks.

In this version, Riley (Odessa A’zion), who is a recovering addict, seems to be going through life pretty freely. She spends most of her time with her boyfriend/fling Trevor (Drew Starkey), while her over-protective brother Matt (Brandon Flynn) and his boyfriend Colin (Adam Faison) look over her. When things though go a little south, Riley falls into old habits and with it comes some bad ideas. One of those ideas comes from Trevor, in which he and Riley break into a shipping container that was left by some rich guy. Of course easy money always sounds like a good idea and once in they find a safe, but the only thing inside is a box with a cube looking thing inside it. With the thought, it has to be worth something, they take it back home. Soon Riley finds out it is a bad idea as after a night of taking drugs she awakes to have a weird memory of her brother coming for her, with the only proof being that the cube has changed shapes. This is just the beginning of bad times for Riley, as she is about to be introduced to a world that she is going to wish she never stepped foot in.

Written by Ben Collins and Luke Piotrowski, from a story by David S. Goyer, Hellraiser  really lays into the mythology of the series, which not only spans many movies, but books and comics as well. The story though is not what you come for, as the star of the show is Pinhead, who is played perfectly by Jamie Clayton who is having to fill the shoes of Doug Bradley, who played Pinhead for the previous eight films. If you have survived the last few films in the series, first, God bless you, but know that this latest entry is nowhere near that quality.  Instead, director David Bruckner has delivered what may be the second best film in a movie franchise that goes back some twenty-five years.

Hellraiser  is definitely a gore soaked good time to be had. Although the name might get you in the door, you will definably be glad you did. Most reboots tend to follow the path that was laid out in front of them, but the team behind this Hellraiser  have forged their own path. I rather enjoyed this, with my only problem coming from what I considered an annoying character, one who I wished bad things would happen to. Once I got over that, I was happy to see Bruckner pulling out this franchise from the gutter, in what I hope is setting up many more visits from Pinhead and the Cenobites gang.