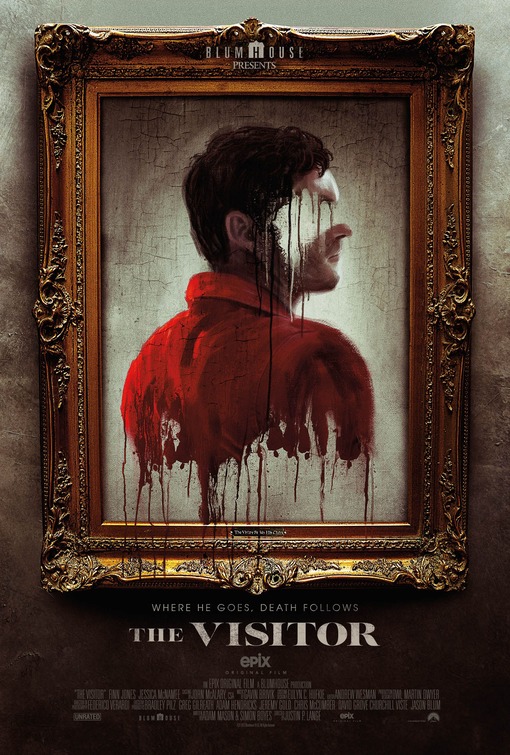 Have you ever seen a picture of someone in the past and been startled at the resemblance to yourself? Some say we all have a doppelgänger in this world and in my case I just hope they are living their best life. Now what if you found not one, but a series of paintings that had your face in it?  I know I would not take that well, but how will Robert (Finn Jones) take it when he discovers this?

Robert has moved from jolly ole London back to his wife Mya’s ( Jessica McMamee) home town, after her father has died. Once they get settled in, Robert finds a painting titled “ The Visitor” and a man in it that eerily looks a lot like him. After his discovery, he brings it to his wife’s attention, who only laughs it off and makes a joke out of it. While not completely forgotten, Robert tries to move on, but gets a weird feeling like the people of this town know him a lot better than they should. Put off by all of this, Robert finds himself at an antique shop, where he finds another painting with someone who looks like him, but during the Civil War. Trying to get answers, he ask the lady at the shop, who upon seeing him tells him to get out and to never return. Now this would probably be enough for most people, but Robert keeps carrying on, until he uncovers something that he is going to wish he hadn’t.

Written by Simon Boyes and Adam Mason, The Visitor  is pretty generic horror, offering nothing that feels original or new. Instead it feels like it is just checking boxes for what is needed to be scary and not putting really anything into it. If  a character movies to a new town, that is filled with weird townsfolk, all while our main character is having weird recurring nightmares along with plenty of cult symbolism, then you are in a horror movie. Even with those standard ingredients, things can take an original turn, but The Visitor is content with being bland. Jones, who didn’t get much love for his days on Iron Fist , is not given much to work with here and as he learns the truth you kind of just want him to make good decisions. Fear nothing  though, as of course he is going to choose wrong as the story never can seem to get out of its own way.

I wasn’t expecting much with The Visitor and it still found a way to fail me. This is easily one of those movies you forget as soon as it ends, especially with an underwhelming ending. In a year that has had so many good if not great horror movies, it is disappointing to get something as stale as this. You would be better off being a visitor in someone else’s horror movie.