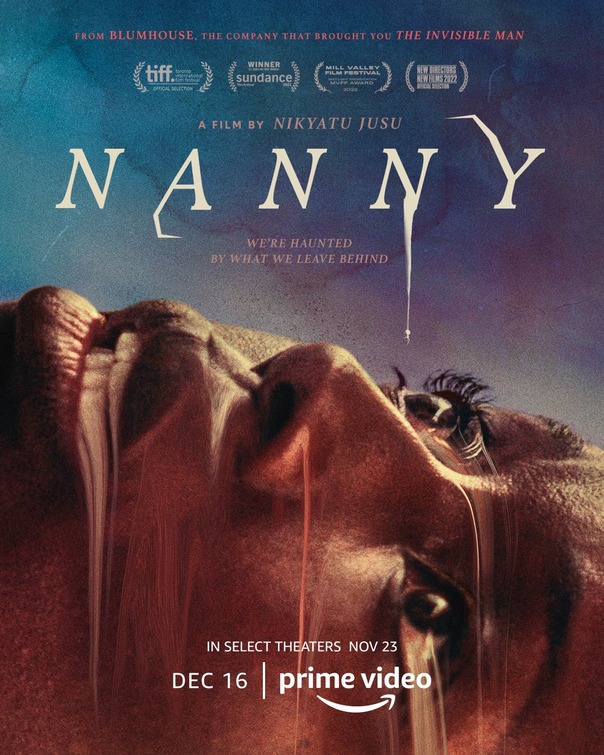 There are many women who move to this country with the intension of bringing their own children to offer them a better life. Getting money to do that can be difficult when you are not documented, but many of those women who land in New York City end up caring for someone else’s kids, while a family member cares for their own. Writer/director Nikyatu Jusu’s film Nanny  puts you in one of those immigrant’s shoes and you are not going to be able to shake it once you’ve seen it.

Aisha  (Anna Diop) has longed to be able to bring her son from Senegal to America, but she needs money to be able to do that. With that goal she takes a job as a nanny for a well-to-do couple in Amy (Michelle Monaghan) and Adam (Morgan Spector)  and although she has just met Amy, it seems like a good fit. Aisha has really formed a connection with the little girl, whose name is Rose (Rose Decker), even improving her eating habits, something both parents are surprised to see. Although on the surface things look good, Aisha is having visions of strange things happening. Most of these visions take place at night, but they are only getting worse as time progresses. To top that off, the woman she works for, Amy, has not been paying her on time and she is having to turn to the husband to get some of the money that is owed to her. With the added hours, it is more difficult for her to talk to her son and the lack of pay is preventing her from bringing him over before his birthday. As time goes on and those visions get darker, she starts to wonder if they are a message or is she just going crazy?

Nanny  is an effectively well-crafted slice of horror that also has a powerful social conscious. Jusu finds unsettling and creative ways to deliver a parents fear, while highlighting a way of life of many immigrant women of color. Combining this with West African folklore only enhances the film Jusu is telling. The story is not the only place that Nanny excels, as it looks incredible thanks to Rina Tang’s fantastic cinematography. Her choice of color palette is both stunning and haunting, while leaving you agape at what she was able to accomplish.

Nanny is a story about maternal instincts as well as a commentary regarding a situation many know about, yet not much is in the conversations. While Jusu’s narrative and Tang’s cinematography stand out, nether shine as bright as Diop’s performance. She commands the screen and is mesmerizing to watch. Diop gives Aisha a quiet yearning and calmness in the beginning, which only enhances the changes as the story progresses. Horrors can come from every angle in life and Nanny is best with its description of an experience that is both traumatic and fragile. The place where Jusu does falter some is the abrupt ending of things as the buildup is stronger than the conclusion. With that said though I enjoyed Nanny and can’t wait to see what Jusu and everyone involved does next.