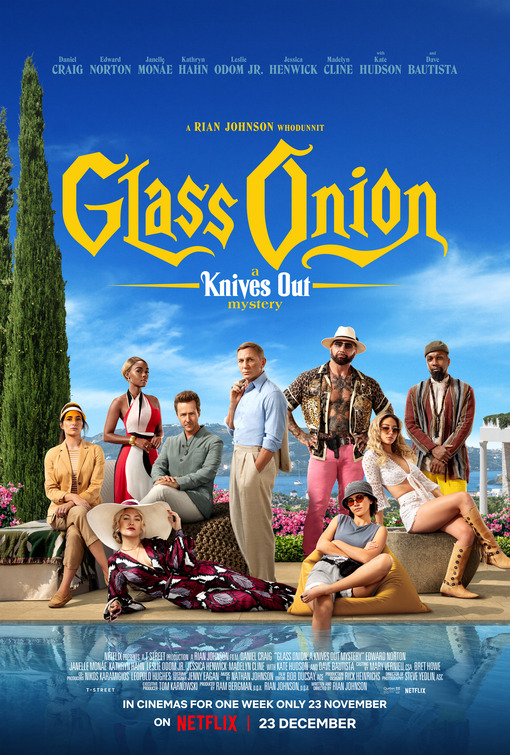 When you run down a list of sequels, the amount of them that are better, or even equal to the original is not very high. Yet that has not stopped the production of them, or the need to make them” bigger” after a film does well at the box office. All of that is a nice way of saying most sequels are rarely on the same level as the original, so when they announced a couple sequels to Knives Out, I  was a little worried.  Well I am here to report back, something I should have known already, never doubt the talent of Rian Johnson ever again.

Sometime in early 2020, with everyone at home because of the pandemic, four individuals received a box addressed to them. They are, Birdie Jay (Kate Hudson), Duke Cody (Dave Bautista), Clair Debella (Kathryn Hahn), and Lionel Toussaint (Leslie Odom Jr. ) all whom owe some, if not all of their success to one man. That man is Miles Bron (Edward Norton), who has used a puzzle box to invite his closest friends to a getaway to his private island in Greece. Also on the list is Andi Brand (Janelle Monáe), Miles’s old business partner, a relationship that did not end well, and lastly, the world’s best detective, Benoit Blanc (Daniel Craig). Once the group arrives on the island, Bron informs them of his weekend plans, in which they will all participate in solving his murder. Things though are not what they seem, as Blanc was not invited by Brom, which leads to another mystery that was not planned. Ultimately an uninvited guest is the least of the groups worries, as a murder of one of them will put Blanc’s talents to good use.

Although Johnson does follow the “bigger must mean better” philosophy of a sequel, it does not hurt Glass Onion at all. Far from New England and a collection of wool sweaters, we are given a far less straightforward murder mystery. In that this particular mystery is bigger and because of that, we are also given incredibly impressive plotting that makes it riveting and is just as fun as the first film. Johnson seems to have found his niche, which such a high-concept project that say something about the current state of reality. With Glass Onion, his cast of characters are clearly, a version of real-life figures, some who may say, “plague” society  and who seem to always have it coming to them when mocked. Speaking of the cast, they are uniformly excellent, but once again the man of the hour is Benoit Blanc, played once again by Craig to perfection.

Glass Onion is meticulously crafted as Johnson deploys the tactics that are needed to test the audience, while pushing the envelope on what to expect from a crime/mystery/triller/comedy. Sure if you are a fan of mysteries you are going to have fun piecing everything together, but if you just want a good time at the movies, Glass Onion is that and then some. I think it all works because there is no clear effort to try and make a better film that the first Knives Out, instead what is delivered is another great whodunit that only Rian Johnson could bring to the screen.