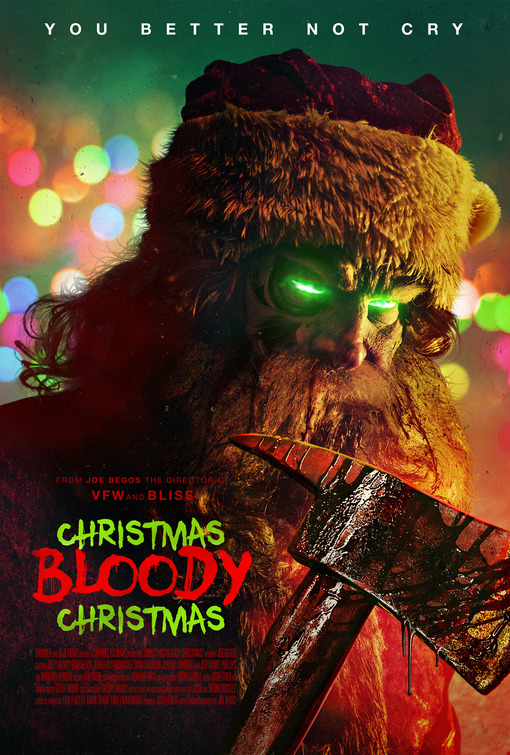 When you start to hear Mariah Carey’s “All I want for Christmas is You” on the radio, it can only mean one thing, it’s the holiday season. ‘Tis also the season for new holiday movie offerings. Even if most tend to be forgettable, *cough* Hallmark *cough* you are sure to find a few that don’t feel like lumps of coal in your stocking. Most people do gravitate towards ones with happy endings, and while I do love those, I also like Christmas movies that, get a little bloody.

I know I must have been a good boy this year as Santa has brought me a Christmas movie that is a bloody good time and all I can axe for. In any town U.S.A., Toni (Riley Dandy) owns a vintage store that has records, video tapes, and clothing. Not a huge fan of the holiday season, she would much rather have a good time than a quiet evening roasting chestnuts. So with that in mind she plans to finally give that guy from Tinder a chance, but her employee Robbie (Sam Delich) convinces her to hang out with him instead. So off to have some fun, where the first stop is the toy shop, where Riley’s friend and her boyfriend are having a little party. After a few drinks they leave, but  you know he was watching, and that “he” is this case is an A.I. Santa Claus that is about to go a little haywire. Making quick work of the friend and her man, the not so jolly fella heads to find Toni and Robbie and starting a night no one in this town will soon forget.

Written and directed by Joe Begos, who had originally pitched a Silent Night, Deadly Night remake that was not well received. It was after some retooling that got this film the green light, which came with a large budget too. Bregos doesn’t’ worry too much about plot or try to stick to what could happen in reality, instead he unleashes a robotic Santa that you have no idea why he is killing, but you also don’t care either. For the first hour, Christmas Bloody Christmas offers us a few kills as well as a healthy amount of dark humor. Dandy as Toni does her best Linda Hamilton impersonation and gives killer Santa a fight I don’t think he was programed for. What we get it a lot of good kills and an overall production value that throws every penny at the screen.

Christmas Bloody Christmas is exactly what its audience is looking for, and that is Christmas gore and so much more. Although Begos does his part, the real MVP’s might be the make-up/ special effects departments as the film really delivers on that front. Robotic Santa looks fantastic and as the night wears on and Dandy gets some killer hits in, he looks even more cool. This is the kind of movie you want to get your friends together and have a few adult beverages and just have a damn good time with. Begos has yet to make a sequel to one to his films yet, but if he ever chooses to, I would love to see that robotic killing Santa come down the chimney once again.

Avatar: The Way of Water