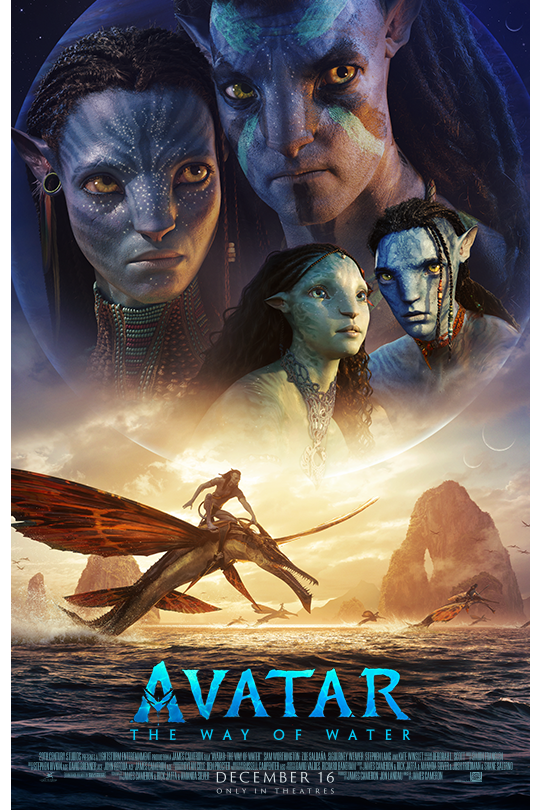 Director James Cameron has had some experience with sequels. In most cases he has added to or improved upon the success of the previous film. In Aliens he gave us even more xenomorphs and their “bitch” queen. In Terminator 2: Judgement Day he gave us liquid metal. And in Piranha II: The Spawning, he gave us fish with wings. Well it’s been over forty years since then and he’s come full circle with Avatar: The Way of Water. Which has- you guessed it, fish with wings.

We return to the incredible world of Pandora years after the events of the first Avatar (2009) Jake Sully (Sam Worthington) in his now permanent Na’vi body is married to Neytiri (Zoe Saldaña). Together they have four children Neteyam (Jaime Faltters), Lo’ak (Britain Dalton), Tuk (Trinity Jo-Li Bliss), and adopted daughter Kiri (Sigourney Weaver), and a human boy they look after, Spider (Jack Champion). After a decade of peace the humans have returned this time in full force, not just scientists and a small military group looking to mine Unobtanium (which is no longer important in this film). This time the humans are looking to make this planet their new home, while former foe Miles Quaritch (Stephen Lang) is looking for revenge on Jake Sully. His plan? To do what Jake did in the first film and go “native” by securing his own avatar body, and with a mix of both human and avatar Marines hunt down and kill Jake.

Not being one to give up on technology, Cameron utilizes the techniques he helped usher in, enhanced 3-D, motion-capture, and the use of 48 frames per second (our eyes are used to 24 fps, which is why movies look the way they do to us). However in the intervening 13 years since Avatar that tech was tried and fumbled by several major studios, including the current reining champion: Marvel. This go-round for Cameron the result is a mix between utter magnificence and cut-scenes of a  Metal Gear Solid game.

The scriptwriting has shown an improvement with the addition of writing duo Amanda Silver and Rick Jafa who did some great work with the recent Planet of the Apes series. Here it looks like they did their best with the parameters that Cameron set down. Unfortunately there are many issues that were flat out lifted from the previous story, only this time Jake and Neytiri’s kids are dealing with them. It’s almost an underwater version of the first film. There is an interesting dynamic explored by taking the family who lived in the forest having to relocate to the ocean. Many military families will be able to relate for sure. But most of what we see (bullies, crazy neighbors) has been seen and done before in other films.

There are also long stretches where nothing is happening, it’s just real pretty to look at, especially in 3-D done the way it was meant to be done. But with an over 3 hour runtime, there is plenty of time for calm, contemplative moments where characters get to swim with alien whales. The biggest disservice is done to Saldaña’s character Neytiri, who I would argue was the heart and soul of the first film. Here is given practically nothing to do besides scream in anguish and follow Jake’s lead even though he’s been a human longer and on another planet. What saves the film is the kids, who almost all get time to shine throughout the film (well, most of them). Also the final action scene, which we are used to being 20-30 minutes long, is just at an hour here and is filled with most of the films best moments.

My bar for The Way of Water was not very high as I did not love Avatar as much as a lot of other people. So this was a step up in my opinion despite its flaws. And you for sure need to dish out the extra cash for the 3-D and watch this on the biggest screen possible. That’s the way Cameron wants you to see it, and even though his sequel record is not exactly tarnished here, he still has Avatar 3, Avatar 4 and Avatar 5 coming in the next decade to get it right.