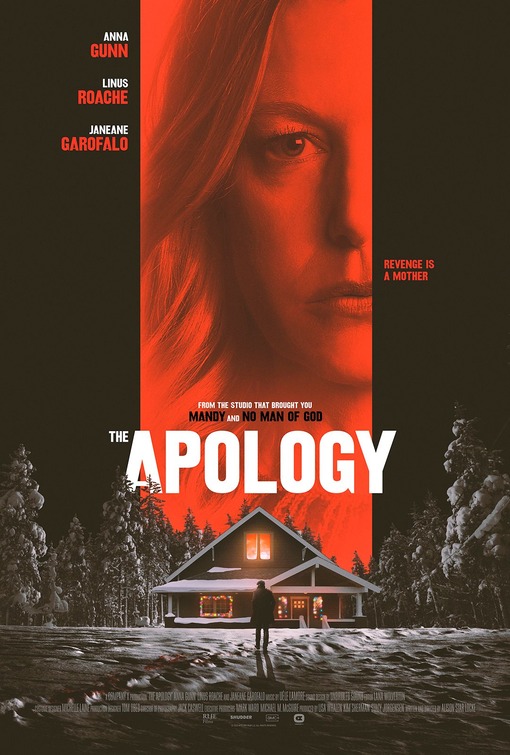 On a wintery Christmas Eve, Darlene (Anna Gunn) is preparing to host her families’  Christmas with the help of her friend Gretchen (Janeane Garofalo). Darlene definitely lacks the confidence in the hosting duties, but you can’t blame her because of her past. Everything can be traced back twenty years ago, where her daughter Sally went missing. Darlene also had a drinking problem, but that is now in her past, as she tries to move on with her life. Despite her ghosts, it seems that she is in a good place and might be ready for Christmastime. As she is settling down for the night, there is a knock at her door, for someone in her past that will take her night in a whole new direction. The guest is her former brother-in-law, Jack (Linus Roache), in which seems like a visit to rekindle something that might have been between them years ago. Things start off cordial, but Jack has a secret that he needs to tell Darlene, and that secret is going to rattle her very soul.

Taking place all inside the comforts of Darlene’s home on a snowy night, The Apology sets a pretty forbidding atmosphere. When you combine the frightful weather outside and the equally chill on the inside between Jack and Darlene, you know you are in for something tense. Being a mostly two person show also gives the film a very theater quality to it that keeps the audience invested in the twisted evening that is unfolding. The script by Locke is sharp and the pace is brisk in this 90-minute tightly wound thriller.

The Apology is a film that relies less on frights and instead on tension and suspense. Both Gunn and Roache are more than up to par, as they play perfectly equal adversaries as the advantage seems to switch between them both. Gunn really delivers an emotional performance as she makes you feel her character’s every ounce of pain, while also making you think about what you would do in her situation. It is not all suspense though, as the last half hour delivers some action, but doesn’t feel out of place in the narrative. I for one love a good thriller and although The Apology  does have a few missteps, it overall delivers what you want it to and can be added to a list of good Christmas thrillers.

Avatar: The Way of Water