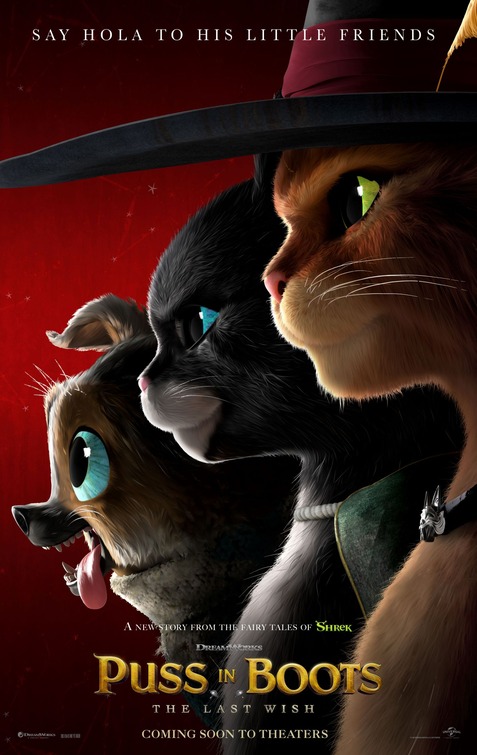 It feels like it has been too long since we had our last Puss in Boots adventure. Not as long as it took for the Avatar sequel, but eleven years since we last saw that spicy gato is even longer in cat years. Never fear though, because it is hard to keep a good cat down and Puss in Boots has returned for what might be his greatest and most personal adventure yet.

Living the life of a legend can be a hard life and Puss in Boots (Antonio Banderas) has been doing his best to keep that legend large. His latest escapade involves taking on a Governer’s guards that leads to a battle with a mountain troll that really rings his bell.  It is after that event that a doctor has Puss in Boots run down his past lives and it seems he is down to his last one. Of course Puss is not very worried, but the doctor prescribes retirement, something Puss is not quite ready to do. Things change over a shot of milk as a Big Bad Wolf (Wagner Moura) comes to claim Puss’s last life and they have a battle that causes Puss to run for his life and seek a life of a regular cat. It is there that he meets Perro (Harvey Gullén), a dog with a sunny disposition, who really wants to be Puss’s friend. Adventure though seeks out legends and soon Puss is pulled out of retirement so that he can find a map to the wishing star. It is his plan to find the star so that he can with to have his nine lives again and continue to be the Puss he always has been. However, he is not the only one looking for the map, his competition is an old flame in Kitty Softpaws (Salma Hayek), as well as Goldilocks and The Three Bears, and Jack Horner who are all in a race that will be quite the tale to tell.

Written by Paul Fisher, with story credit also going to Tommy Swerdlow and Tom Wheeler, Puss in Boots: The Last Wish makes you glad to be back in the Shrek universe. The plot is darker, but the humor is still there as well as all the fairy tale characters we get to meet along the way. When you add all of that together you get a movie that is vibrant fun, that even often switches animation styles that has a little Into the SpiderVerse  look to it. It is the different look and feel that make Puss in Boots: The Last Wish not feel like a sequel, but a singular movie all on its own.

Although diving into a crisis of meaning might not sound like a good time, The Last Wish makes this affair entertaining and an exciting fun time. From the opening musical number to the wild adventures, for a story eleven years removed from its sequel, it’s better than anyone could expect. When you add the voice cast lead by Banderas and Hayek, who are fantastic together as they were almost 30 years ago in Desperado. With this latest installment, Puss and company have firmly taken the torch from the Shrek movies and run to the finish line. This for me is the best animated studio movie of the year and my only wish is we don’t have to wait eleven more years for another adventure.

Knock at the Cabin