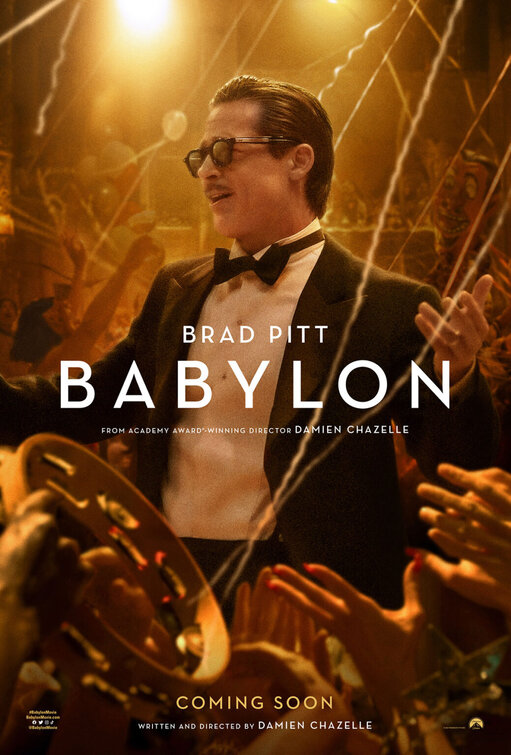 When talking about times that might have been filled with chaos, we often give them names like the “wild west”. Then we got a time filled with so much insanity, some of which was captured on film in the late days of the silent era in Hollywood, which came to be known as “the roaring twenties”. This is where Damien Chazelle’s new film Babylon is set, and it gives the wild west a run for its money.

You know you are in for a ride when before the title comes up on screen an elephant shits on a guy as well as a woman reliving herself on another man.  All of this happens at a lavish and wild party put on but a Hollywood producer, where anything and I mean anything goes. As crazy as this party is, if you are anyone you are there, as it is the place to be. Helping at the party is Manny Torres (Diego Calva), who wants to be more than a guy who helps make sure things are not going too far off the rails. While Manny is doing his job,he meets Nellie LaRoy (Margot Robbie), a wannabe star who seems to have the “it” factor as she has a knack for getting attention. With Nellie and Manny trying to get into the business you also have Jack Conrad (Brad Pitt), who is one of the screen’s biggest starts and commands any room he walks into. Babylon’s story revolves around these three characters and the decisions they make all while Hollywood transitions from silent movies to talkies. Things start to take off for Manny when he takes Jack home and Jack takes a liking to the guy and starts letting him drive him around. For LaRoy it is more about being in the right place at the right time and another girl’s loss, is her gain. The day after the party she is on a set and nails her role and is soon the shiny new thing that can cry on cue. But it can all can go as fast as it came and Babylon shows you how fast things can change, all while giving you a ride you won’t soon forget.

The story Babylon tells has been told before and the story has feels like a marriage of both Singing in the Rain and Boogie Nights. Although the two movies couldn’t be further apart, they both take place during a transition, much like Babylon does. Chazelle takes aspects from both stories which follows the highest of highs and lowest of lows for his characters as Hollywood embraces the new format of talking on film. When you put it all together and add another amazing score by Justin Hurwitz, you get a whirlwind turning point for Hollywood.

I would not be surprised if some people who saw this would need a deep breath after the first twenty minutes, but it is best to just embrace the chaos as it will be rewarding to most. Although there are times when the movie feels bloated, with so many stories being told. Some could argue there are parts that could be their own movies, but it is pretty impressive that Chazelle makes it all work. Babylon is not Hollywood told through filters, no, instead it’s a raw and unyielding look that you may ever see. The three leads are all great, with Robbie and Calva standing out, and Pitt being as brilliant as he is most times, playing a movie star, a role he might be familiar with. Chazelle’s narrative and choices though are the real stars as he pulls back the curtain on Tinseltown, revealing its seedy underbelly.  Although he may show that, make no mistake, this is another love letter to cinema, which is all apparent with Babylon’s final ten minutes that is a reminder of the pioneers of the medium and their contribution as well as the power of a great movie, something Babylon has with room to spare.

Puss in Boots : The Last Wish