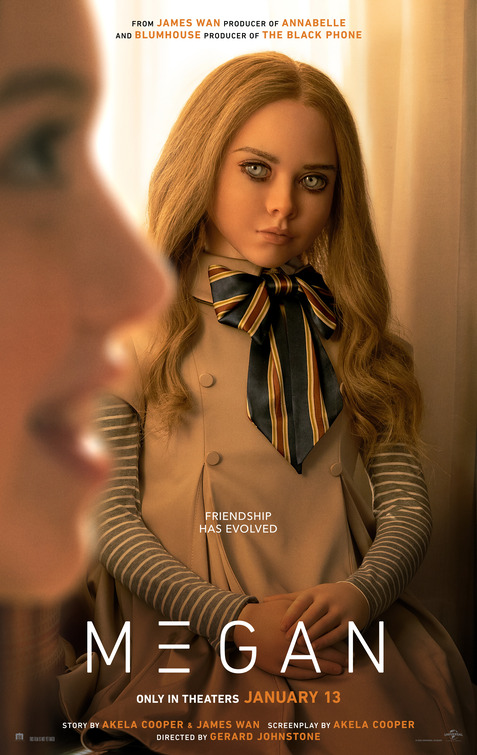 As a kid I would spent plenty of time alone and would think how much more fun things would be if I had a “friend to the end” to play with. Of course that didn’t exist, as the only one available was a red-headed doll that was possessed by the soul of a serial killer. Well, that was the eighties, but thanks to marvelous technological advancements a soul is no longer needed, we now have a doll that will be your friend thanks to A.I., I mean what could possibly go wrong?

On a snowy night Cady (Violet McGraw) and her parents are driving, when low visibility causes them to get in an accident. Having lost both her parents, Cady is placed with her aunt Gemma (Allison Williams) and while she does want her, needless to say there are some adjustments that need to be made. Things are hard for both but with the added stress at her job as a toy developer, Gemma comes up with an idea that could help everyone. Gemma has been developing the ultimate toy for kids, and Cady’s situation is the inspiration for her to finish. Gamma introduces Cady to M3gan (Amie Donald/Jenna Davis-voice) a tween-sized AI robot, and the two hit it off almost right away. M3gan has been designed to learn with Cady as she becomes the perfect friend and so much more. Everything is going great, but part of M3gan’s programming is to protect Cady and because of that, things start to get a little darker. It starts off with a dog that bites Cady, but soon M3gan has other plans and she is not afraid of getting rid of the people who oppose her.

Written by Akela Cooper, for a story by James Wan, M3gan never takes itself too seriously, as it knows exactly what it is. It is mostly entertaining and at times silly, but it also explores trauma, as well as the dangers of technology, something I don’t think we will ever pay attention to (does anyone remember Black Mirror?). Of course the plot feels familiar, but Wan and Cooper use that to their advantage and despite the A.I and killer doll troupes, they put together something pretty fun to watch. M3gan’s first two acts are its strongest and while it wants to be bad, it never gets there thanks to its PG-13 rating. Somewhere in there is one hell of a R-rated film, but even with that said this version is entertaining enough.

For my money M3gan is a horror fans delight and for sure has just introduced a new character to be put up on the horror wall of fame. The concept just works and thanks to the creative team, led by Wan, mostly delivers on the films promises. This is a fun thriller and gives the creepy doll vibes throughout as well as reminds us the dangers of technology. Unfortunately I fear this will serve more as inspiration for some rather than the warnings they should be and M3gan will most likely be on shelves in time for next Christmas.