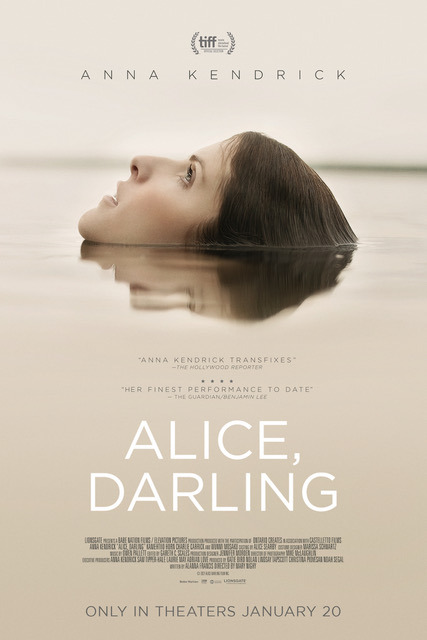 I think most of us have been in a situation with a friend that we see involved in something that is bad for them, but we seem powerless to help them. That situation could be a relationship they are in or maybe a substance abuse problem, we just know that when they are in a bad place, we try to make them see that. That is difficult though as it is hard to see when you are so deep into something, where the only way you see out is giving them the time they need to see it for themselves.

If you were a casual viewer of Alice’s (Anna Kendrick) life, you would think it is going pretty well. She seems to be doing great with her job and she has a boyfriend named Simon (Charlie Carrick) ,who is an artist and seems to adore her. Although the casual friend might not see anything, Alice’s two best friends, Sophie (Wummi Mosaku) and Tess (Kaniehtiio Horn) know that something is wrong. The three of them don’t get together often, but with Tess’s birthday coming up, they plan on going to Sophie parent’s cabin by the lake. That week arrives, and at first Alice starts to make an excuse on why she can’t go, but after some convincing she lies to Simon, claiming she needs to go on a work trip. When they first arrive things are not going well between Alice and the other two, as Alice seems distant and is always on her phone, checking in with Simon. Tess though gets a good idea and misplaces Alice’s phone, forcing her to withdraw from that and to engage with her and Sophie. That turns out to be a bad move, as it was the first time that Alice started to see her relationship with Simon for what it truly was.

Written by Alanna Francis Alice, Darling  goes head first into the very complex issues of partner abuse in a realistic and painful way. Alice is in a relationship with a guy who gaslights her and controls her, but she rationalizes it by telling her friends “ but he doesn’t hurt me”. That though is not true, as Simon does hurt her, just not in the ways you might be used to seeing on screen. One of the better things that Alice, Darling does is convey how charming, yet menacing Simon is, even with very little screen time. This really puts you in Alice’s shoes, as you can see why she has a hard time seeing what he is really doing. Kendrick is really good, as we see her in a role we are not used to seeing her in and she excels in playing it.

Alice, Darling does some things right, but it is not without its shortcomings.  The pace of the movie is a little slow and there seems to be something lacking that keeps it from being truly good. With that said though it still brings to light a hidden abuse and one less talked about than the physical kind. For some women this movie will hit very close to home, but for others it could be an eye opener, and while it never reaches it potential, it still solid and achieves most of its going for.