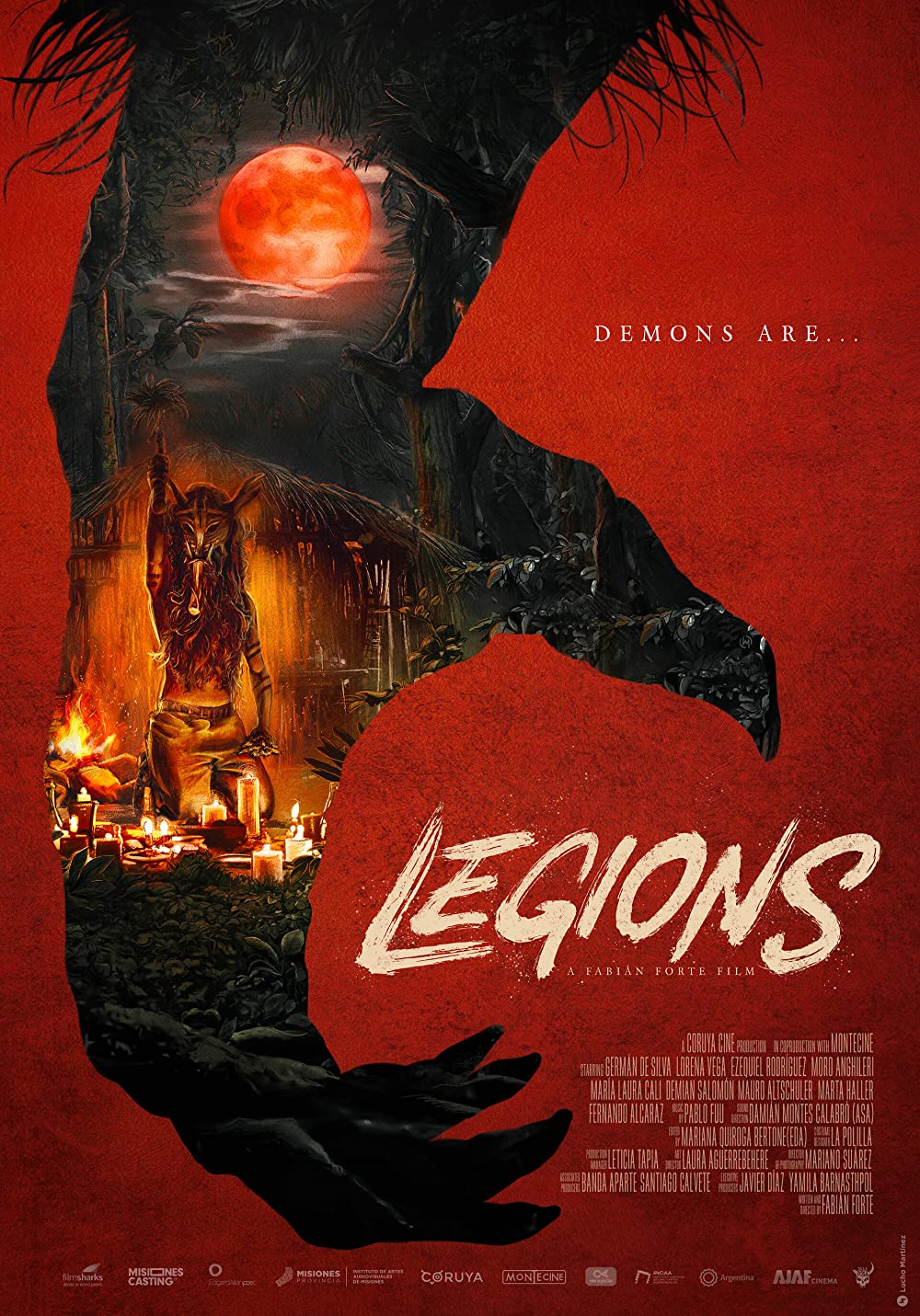 Sometimes you just can’t fit a movie in a certain box and Fabián Forte’s new film Legions is one such movie. With its mixture of supernatural terror and comedic gore, it really is a genre-bending experience. You can tell Forte is a fan of The Evil Dead film series and with how well the film comes across, you can tell he paid attention to what made them classics.

Antonio (Germán de Silva) is a sorcerer who belongs to a powerful blood lineage that some evil would really like to have. Some years ago, around 1980, Antonio lived in the forest where he would perform rituals and free people from possession. At some point he had a daughter with his wife, but after his wife dies and another event occurs, Antonio and his daughter move to the city, where things are kind of normal. That though was the past, and today Antonio is in an insane asylum as he spends his days telling stories to the other inmates. Those other inmates are generally interested in them and have even turned them into a play that they plan to put on. Antonio is content as he is waiting for news about being released, but a visitor he receives is about to speed up his wanting to be released timeline. This visitor tells Antonio, that a demon is coming for his daughter Elana (Lorena Vega) and for the blood that runs through her veins.  Antonio knows he must get to her and warn her of what is coming, as over time Elana has lost her faith, which makes her very vulnerable to something happening to her. Antonio escapes with the help of the other inmates, but will he be able to convince Elana to what is coming and abolish the demon that wants to do her harm?

Legions, which Forte both wrote and directed, has some amusing moments and even though the story might seem familiar, it feels different enough thanks to its framing. Although I did talk about The Evil Dead films earlier, those expecting a film like that will be disappointed. There is a lot of set up, but the final 20 minutes or so will give you those “ Evil Dead” vibes you so want. When it comes to the film’s relationships, Forte does a decent job of setting up a foundation, but it still lacks some vital elements. The most important thing it needed is the development of the father/daughter relationship. We only get a few flashbacks to set the table for where they are at now. Even with that not happening, there is enough there to give us a shorthand.

Where Legions shines is in a couple areas, the special effects and de Silva’s performance. Filled with practical effects, which only adds to the feel that it is aiming for, which is a sense of realism, while immersing the audience in the narrative. As for de Silva’s performance, he is the backbone of the movie and his face displays the weariness and fatigue of Antonio. I know fans of this genre will have a lot of fun with this movie, especially with it’s practical effects, which are top notch. I look forward to what Forte does next, because so far he has delivered.