Brian- Good Morning.
Stephen- How are you doing?
Brian- I’m doing well, thanks. Love the film, like I said. I just want to start with, what are the differences between writing for the stage and for the screen?
Stephen- That’s a big question. So, I would say, the first thing that comes to mind is my mind switches to visual thinking, I start to think in images. In the case of adapting “The Humans” that meant a lot of the dialogue fell away. That’s not always the case but in this case I’d say like a third of the script of the play just kind of vanished in terms of what you can do without words or what could be understood, history of relationships. Beanie Fledstein (Brigid) and Steven Yeun (Richard), the way they just interact with each other, exposition can fall away if you let the audience just into it- maybe how long they’ve been together based on their level of humor and the fact that they still don’t hate each other too much, so the relationship hasn’t been going on too long, but things like that. In this case, I very much side by side with the script had, you know, the entire book of images that I was assembling because I was seeing the movie that specifically so I would say the big key for me is just really getting away from the play and the words and the structure and just being able to reinvent it by really really seeing it as a movie. And that to me just means taking it apart.
Brian- And then you put it back together. 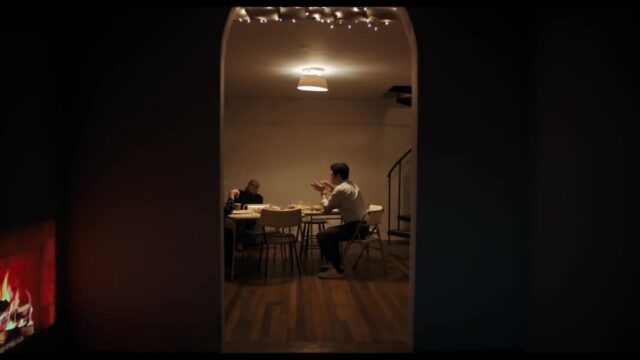 Stephen- And putting it back together in a way that in some ways you just keep trying to get at the soul of the story. But the gift of any genre is that means telling it in a different way.
Brian- So, when you were adapting this, was there a scene or scenes that you found challenging transitioning from the stage to the screen?
Stephen- Yes, but I felt like the challengings ones were also the most exciting ones, probably the reason why I wanted to do it. There were instincts about a big sort of symphonic opening and sky shapes but wanting it to be simple and the terror of the play, that it starts so quietly like it’s a mistake but sort of leaning into the fact that it felt right. It felt like it was the DNA of this new creature I was creating. So those moments of how to enter a world and why those feelings felt right were the things that were the most challenging to really pursue were also the most exciting. And the final, I don’t want to ruin the ending, spoiler, but the thing that was very technical to imagine, in terms of a kind of expansion into something slightly literally universal, maybe involving stars, was something that in some ways felt very simple and elegant to me. So, I guess to answer your question, those things all felt very challenging logistically to think about but also to implement because your instinct is to always, the fear is always “Oh my God the play worked. I should just do the play!”. Luckily I had no interest in doing that, the thing that helped me push past that fear was that I was less scared to fail and I was just like “Let’s go down in flames.” but like, making a movie. That’s sort of what kept pushing me running towards those challenges. Weirdly the challenges feel like also why I wanted to do it.
Brian- That’s a good reason. I mean, we all like challenges. So, was there anything you wanted to bring to this film visually that you could not do on stage? 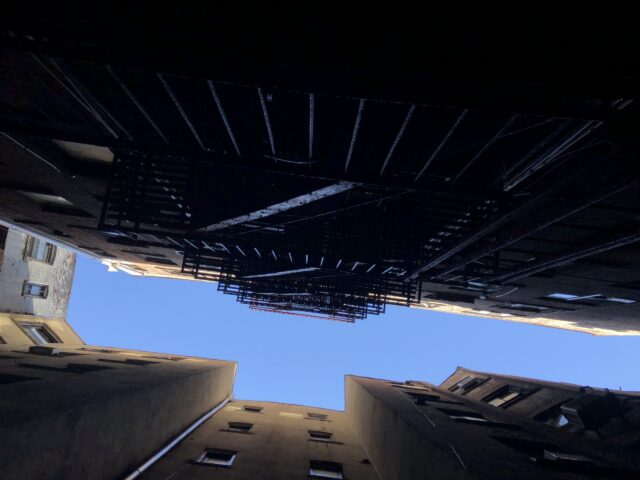 Stephen- Oh yeah, so much, because the camera of course you essentially are playing God and you can tell the audience where to look and you have to be so concerned with a theater where 1200 people’s venture points are so different. So, the ability to go anywhere, I always wanted to glide down that 120 year-old tenement hallway with the character of Aimee played by Amy Schumer. That gorgeous red, Kubrickian, you know. And of course you just can’t do those things. Even where they’re very interior, I always wanted to be in the kitchen with Steven Yeun’s character. I always wanted to hear the sounds and the bubbling and feel that fluorescent light. I would say there’s probably not a shot in the movie where I wasn’t so giddy to be like “finally, I know that the audience is all here.”. When we’re at the chain of that table where she’s sitting in front of the ranch dip and the crutatae, to be able to tell the audience you know. All the other brilliant actors sort of swirling around her and talking and you try to do that on stage but when you’re in the theater you always notice like “oh wow, people are choosing to abandon the incredible middle aged woman”, you can only do so much before you see people just get interested into whatever’s interesting them. Even moments of character where I knew the camera’s going to be on Jayne [Houdyshell] or on Steven or on Beanie or on Amy, those just felt like a huge gifts and of course you know the camera has extreme closeups of all of them but even Richard [Jenkins] in those moments it felt very exciting to be more inside his tension and his fear where as there’s something not so scary, even though I think people would describe the play as a little scary, watching a man with a lantern, you’re just so far away. So, even in the final sequence, it’s really the same sequence of events of the play, it’s just you don’t get to watch it from a safe distance. So, it’s interesting that most people describe the ending as almost a different ending in the film and it’s literally the same ending. It’s just that you actually are with Richard Jenkins and you’re backing down the hallway with him instead of something that does just feel a lot safer. It’s why stage horror is so complicated, you’re always like a breath between being just preposterous and ridiculous and being like “that’s not only not scary, that’s funny and ridiculous” you know what I mean?
Brian- Yeah.
Stephen- It’s why we like going into haunted houses, like they’re experiential but if you had to watch a haunted house or like watch someone walk around one, it’s just not visceral, it’s not scary.
Brian- I actually love the last shot. Not the last shot, I should say the shot at the end when you had both floors of the apartment, I love that. And watching the door open and then the door open at the top, and to see the whole apartment as a whole, I love that. That was great. In theater, rehearsal is everything. So, with this cast, what kind of rehearsal did you have or did you have any?
Stephen- We did, we had nine days of rehearsal which sounds, depending on your knowledge of making movies and your budgets, either a lot of rehearsal time or not enough and for me, because it was my first film, of course I was like “this is not enough time.” But I was also so grateful that it happened for nine days so I took full advantage of it and what I did not anticipate was that they would show up prepared and they all kind of fell in love with each other. It was a little preposterous that they all liked each other. The things that I was really worried about: history building, how would they feel like a family, how do you establish that and in just so little time. Jayne and Richard, both from the midwest, became fast friends, maybe one hour into knowing each other they were talking like they had known each other for a long time. Same thing with Beanie, Amy, Steven, and June [Squibb]. It was just like the gift of six actors that I think audiences know they’re talented people. I wasn’t expecting them to be such consummate professionals and they took it so seriously that the nine days were just super valuable. I remember I had read in a memoir something about Mike Nichols [director] who had three weeks to rehearse “Who’s Afraid of Virigina Wolf?”, [Richard] Burton was with [Elizabeth] Taylor and all four of those actors were so good and I remember thinking “that’s it, they had three weeks of rehearsal”. I was gunning for that and I wanted it to feel like that. I was thinking of portraits of marriages that really felt lived in. I would say that all six of them just totally rose the challenge. I think they all wanted to do it because of that and they knew how I wanted to shoot it so they knew I was like “you’re not going to get the over the shoulder, you’ve got to be good”. At the same time, as your partner, in a lot of these scenes. So they all just really blew me away. 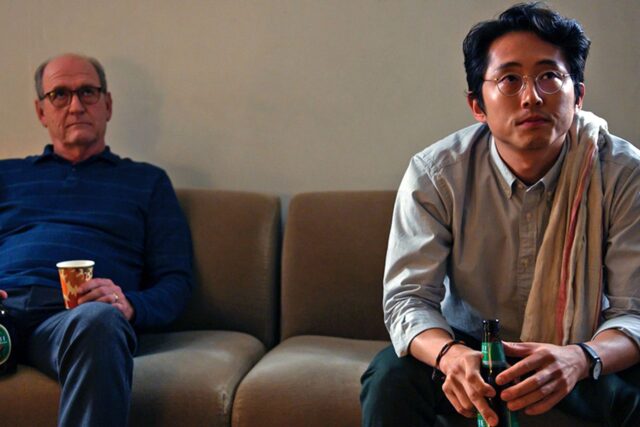 Brian-  You mentioned this being your first directorial, you’ve written three screenplays that you had turned into movies but what did you learn from this shoot that you will take to your next film that you make?
Stephen-  Oh my gosh, so much. I’ve learned that, as messy and complicated as filmmaking can be, having a really strong vision, like deciding to make a movie because you really see it and feel it and believe in it, that just feels like the right place to leap from. I think everything else is always going to be complicated just making a movie like everything else in life is hard, there’s a lot of moving parts, how do you get the money, how do you get the funding, how do you get the actors. I feel like the thing that sort of guided this project to fruition was it had six incredible actors and an unbelievable design team come on board. The core idea was very specific and there was a vision so without judging the vision, if people like it or not, I’d say the thing I’d take away mostly is to not get sucked down some wormhole where you just suddenly you get an opportunity to make a movie and you start making a movie and into week two you’re like “wait, why am I adapting this novel?”. The joy for me that I experienced is being so excited about the material and being able to be a part of a team of people making it was just so built upon that excitement; that’s the thing I hope I hold onto.