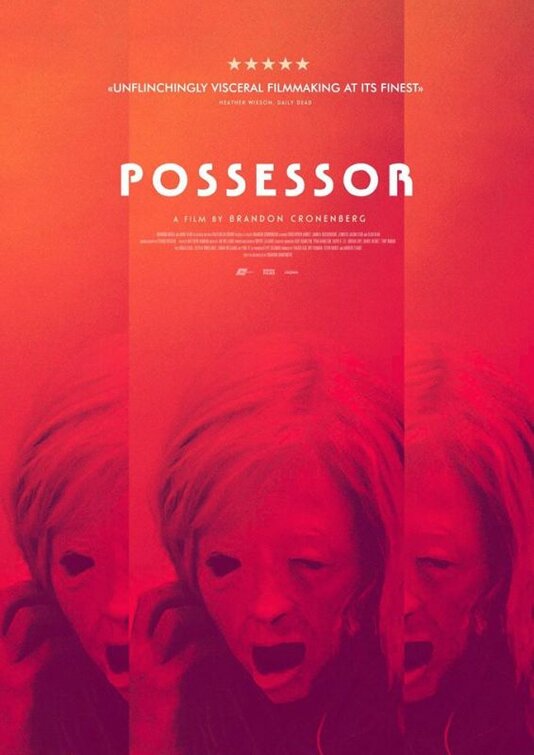 Being the son of David Cronenberg must have been a pretty cool thing, but for Brandon, becoming a director and having to prove you are more than your last name, maybe not so much. Within the open minutes of Possessor you know you are in the hands of a filmmaker who is about to deliver something mind-blowing. The opening shows a young woman sticking something in the top of her head as is getting ready for something. We then follow her to a party where she appears to be some sort of a hostess as she walks up to a guy and cuts his neck. There is shock and awe and before she is about to kill herself we hear her mutter that she is ready and like that, we are taken to a different place and we start to see what is really going on.

The hostess was not really her, she was a woman named Tasya Vas (Andrea Riseborough) who works for an organization that uses implant technology to inhabit other people’s bodies. Taysa Vas is the best they have and after a test to make sure she has not lost her own memories she heads off into the world. Cronenberg’s world is quite a sight to see, with colors that pop, which for me is #goals and a world I would for sure want to live in. Tasya Vas just cares about her son and her job and after seeing him her boss Ginder (Jennifer Jason Leigh) calls her back for her next job. The plan is simple, she is to inhabit Colin Tate (Christopher Abbott) in order to kill his girlfriend Ava (Tuppence Middleton) and her father John Parse (Sean Bean) in order for their brother to inherit the company. Things do not go as planned as Tasya Vas starts to glitch and loses control on Colin putting actions into motion that will affect Tasya in both realities.

Some might say that Brandon Cronenberg, who also wrote the script should have spent as much time on the story as the visuals. I say hogwash to that, as Croenenberg hyper visualization tells a beautiful story that the words just fill in little details. Everything in this film looks amazing, including the cast whose performances though prove they are not just there for their looks. Both Abbott and Riseborough are a sight to witness as they weave through this ultra-violent world that Croenenberg has created. This movie won’t be for everyone because of its violence, but for me it is everything and simply put this will be one the best movies of the year. Possessor wowed me at every turn and even on the second viewing my mouth was still left open at what I was seeing. This narrative sets up a world I want to see more of and I hope Cronenberg wants to bring us more, in whatever form that takes. For now though I am in love with this film and want to tell the world that we need to start using their first names because there is another Cronenberg on the block.