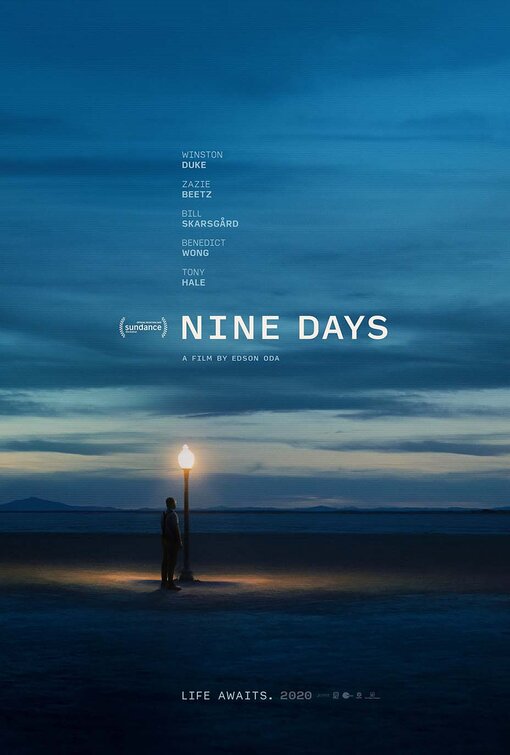 For Edson Oda’s feature debut he asks the question: “What if we had to fight, to be born?”, as if life is not an automatic conclusion, but more of a privilege. Will (Winston Duke) is someone who interviews non-living souls in order to choose one to be born. It is then that he watches their lives and records their every moment. After one of his past candidates life comes to a sudden end, he has to interview a new group of people to be the next one to experience life.

The group is brought in and given names and they start to watch the lives of others on a set of TV monitors as they take notes on what they see.  None will have any memory of the place they are at now, but all of them will stay the same and keep their personality the way it is now. There is Maria (Arianna Ortiz ). Who has a timid, but kind personally. Alexander (Tony Hale) wants to just have fun and would kill to be able to experience a cook-out and have a few cold ones. Kane (Bill Skarsgård) is very precise in his thoughts and the way he acts, finally there is Emma (Zazie Beetz) who takes more of an interest in Will than in the task that she is given. Some can be as simple as observing and reporting, to watching a moment in someone’s life and being asked how they would respond. They are all given a set amount of time and while only one will get to feel what it means to be alive, one will help Will find his meaning once again, a meaning some of us are always searching for.

To put it quite simply, Nine Days might be the most original film I have seen in years. The idea that we all went though an interview process in order to be given the gift of life is an extraordinary story idea. It is certainly feels like nothing you have seen on film. Odo captures so much feeling in the way he tells this story and you can’t help to be wowed at what you are seeing. The story though is not the only revelation you are experiencing, The cast is great throughout, but it is Duke who is the heart and soul of this film and he gives a performance that will be talked about come award season and beyond. Having no idea what I was about to witness, Nine Days became the gift that kept giving with an ending that made me feel all the weight of everything that came before it. There are all kinds of reasons to be excited for the future of both Odo and Duke, but for now let’s reveal in this perfect film that they have put together for us.

The Trial of the Chicago 7