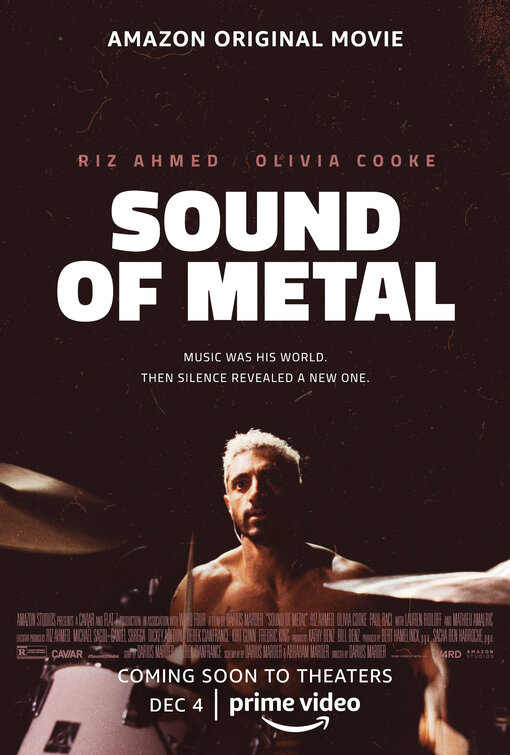 The importance of sound in a movie is something that most people probably don’t pay much attention to. I say that knowing that so many people watch movies on their phone through headphones, so sound design is not on the top of their list needless to say. Sound of Metal though, much like A Quite Place relies on sound as a method of communicating more than just what you are hearing and it quite often puts you in the main characters shoes. What you end up getting is something that can be quite mind blowing.

Ruben (Riz Ahmed) is a drummer in a heavy metal band with his girlfriend Lou (Olivia Cooke), who is the lead singer. They are doing what any band would be doing as they try to make it and are playing gigs as they travel in a RV from town to town. All that starts to change one day when Ruben starts to not hear the world around him anymore. Being a little concerned he is able to get an appointment with a doctor only to find out he has lost 75% of his hearing in both ears. This is troubling news for a drummer, but this is not the only problem Ruben has to deal with.  He is also an addict and is four years sober currently, but losing your hearing all of a sudden and the ability to do the thing you love could be something to push you over the edge. After a call with his sponsor, Ruben is able to get to a farm that helps addicts like himself who can’t hear. Acceptance though is not something Ruben is doing very well and it takes Lou to get him to give it a try.

Sound of Metal goes out of its way to treat being deaf not as a disability, but as a way to live with the loss of one the senses. Darieus Marder, who directed the film, as well as cowrites it with Derek Cianfrance uses sub titles throughout the film, which is very fitting for what you are seeing. They also don’t just show you what can happen when you suddenly lose something that you have had your entire life. From the moment Ruben starts to lose his hearing , you hear, or in this case don’t hear what he does. All of this is really enhanced by a stellar performance by Ahmed, who is becoming one of the better leads in Hollywood. Marder really believes in acting and really just gets out of the way of his cast, which really lets them shine. Sound of Metal  finds a way to thrill you both visually and aurally and really is a mesmerizing debut and one you won’t forget as you wait to see what Marder does next.