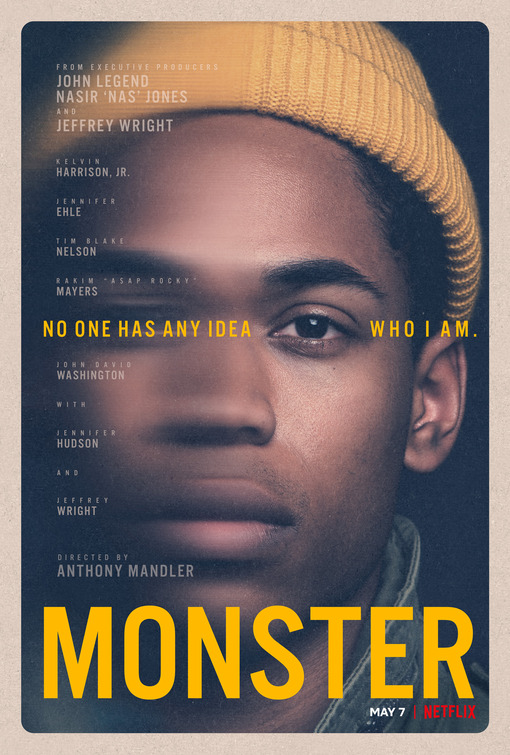 At one point in Monster Mr. Sawicki, who teaches at a High School and leads their film club, is telling his students that every event can be different to the people involved. With that scene everyone behind this film is telling you what this is about, that everything is in the eye of the beholder. Steve (Kelvin Harrison Jr.) is in the film club as it fits in with his desire to become a filmmaker. Everywhere in his neighborhood he is taking pictures, which sometimes puts him in places he should avoid and people he shouldn’t talk to. One of those people is a guy named King (ASAP Rocky), who when he sees Steven he chats him up and in King’s mind, drops knowledge on him about what he sees around him.

You know King isn’t trying to be friends with the kid, he is just trying to see if he can use him, as you find out pretty quickly that King is not a good guy. We see these scenes, but we already know where this is going, as both Steve and King have been arrested and are about to go to trial for the killing of a store clerk. Based on the novel by Walter Dean Myers, Monster feels like a story that is perfect for the time we live in. Janece Shaffer and Colen C. Wiley, who wrote the screenplay tell this in a very heavy handed way for the screen. While the story tells you that every event  has a different point of view, Wiley and Shaffer never want you to forget theirs and remind you where they think your thoughts should be going. The film’s narrative is told from the center as it goes back and forth from court room to the things that lead up to the crime that King and Steve are being accused of. While we see that Steve is not like any of the other kids in his neighborhood when he is out in the world, we are reminded that he is just another black kid being accused of a crime in the courtroom. It starts when the prosecutor calls him and king both “Monsters”, in an attempt to set up something where you already knows how it will all end.

This film is trying to deliver a message, but just can’t seem to get the words to fit well enough to say it. They waste too much time in the courtroom and not enough time getting what is wants to say out there. The film does have an excellent cast and while the likes of Jennifer Hudson, Jeffery Wright, and John David Washington do their part, the only performance that you will remember is that of Harrison Jr. For Harrison this was just the beginning and his star has only gotten brighter since Monster played Sundance in 2018 and is just now being released. Director Anthony Mandler, who is making his feature debut after making a whole bunch of music videos,  has a good eye and some good music choices but he drops the ball too often. He doesn’t know how to create lasting tension and even when he gets the perfect ending, he has to give you a couple more that don’t leave you with a lasting impression. Monster is a flashy movie that has some thoughtful questions, but can’t get out of its on way to answer them.