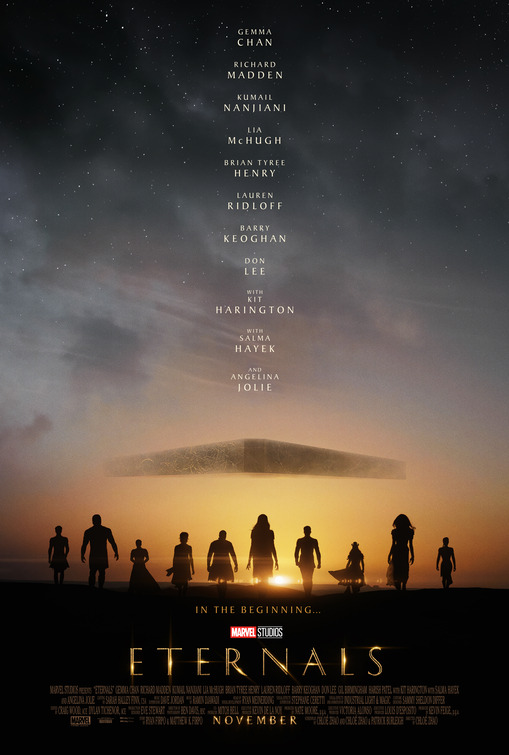 For the last twelve plus years Marvel has delivered over twenty movies that have far benefited for being part of a larger narrative. It’s also what kept us coming back for more, as we all wanted to know was where the story was taking us, which we always got a taste via credit scenes. Now that the first major arc of the Infinity saga has been told, we are entering the new phase of Marvel’s story. However this one so far has a lot less familiar group, some might even say the ‘B” team. Because of that, Some of you might not be familiar with the team of Eternals, they are a group of immortal superheroes who came to Earth thousands of years ago under their leader Ajak (Salma Hayek) to save the people from destruction.

Of course they are successful and after they wipe the Earth clear of the Deviants, creatures that would destroy the world, they are told to just hang out until they are needed again. Time passes and being immortal the group has split up and fit in with the humans on Earth. Things though are about to get interesting as Sersi (Gemma Chan) and Sprite (Lia McHugh) are suddenly attacked by a Deviant and if it wasn’t for Ikaris (Richard Madden) showing up just in time, they might not have made it. With that attack it is time to get the band back together and the three of them go to find Kingo (Kumail Nanjiani), who has become a multi-generational Bollywood star. After some convincing he joins them and they have to find Gilgamesh (Ma Dong-seok), who is taking care of Thena (Angelina Jolie), who is having trouble keeping herself from attacking even members of her own team.  The group is just about complete as it picks up Phastos (Brian Tyree Henry) and Makkari (Lauren Ridloff), but it may not go well for all of them. The screenplay written by Patrick Burleigh, Ryan Firpo, and Chloé Zhao, the later also directing, has a lot to say and at 157 minutes long, it ends up saying a lot.

Zhao, who is just coming off winning an Oscar proves again that she can stage touching moments even amid gripping action scenes. What she can’t do is free herself form the constraints of the MCU, as its hard for an individual’s fingerprints to be seen through the cookie cutter that is the Marvel universe of films. Where you can see Zhao’s added touch is in the visually stunning look of the film, as it is brimming with life, something that Zhao is very good at. As the film gets bigger and the stakes get higher Zhao is able to carry the weight that is on her shoulders and deliver a superhero film that while feels plenty familiar, also breathes some fresh air into the genre.

Eternals delivers a story that is the first big jumping off point for what Marvel has planned next for us. While it has well-paced action and a finale that stands out from the typical MCU showdowns, it is by no means perfect film. You do though have to admire what the creative team brought, which is a grand and sweeping sci-fi story that expands centuries. Welcome to the new MCU and for me at least, the “B” team came to play and delivered something that while not an innovation, is still a solid superhero movie.