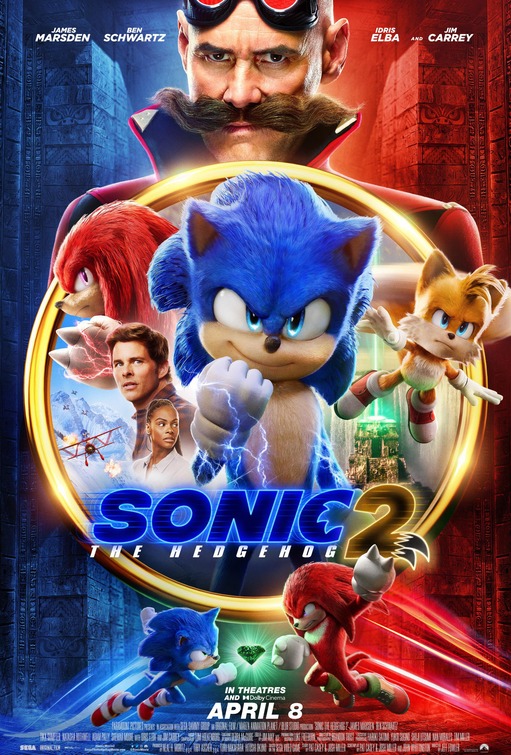 It seems like only yesterday that the biggest problem facing Sonic was the bad choice someone made for his visible appearance in 2020’s Sonic the Hedgehog.  It seems a makeover was all it took to unleash the Sonic everyone grew up loving for years, which began a race to become a box office hit. Two years have passed and Sonic is back and living his best life. During the day he is a mild mannered hedgehog who is super-fast, but at night he is not the hero we need, but the one we deserve, now if he can only sneak back into the house without getting caught.

Things have been pretty quiet in Green Hills since Sonic (Ben Schwartz) defeated Dr. Ivo Robotnik (Jim Carrey) and sent him to Mushroom World. Things though can never stay quiet for long, especially with Sonic around. Dr. Robotnik soon gets the attention of someone in the form of Knuckles (Idris Elba), who is looking for something Sonic might possess. Meanwhile, back in sleepy Green Hills, Sonic is spending the weekend alone as Tom (James Marsden) and Maddie (Tika Sumpter) are attending a wedding in Hawaii. This is when Sonic gets unexpected guests in the form of Dr. Robotnik and Knuckles and just when things look dire for Sonic, a new friend appears, Tails (Colleen O’ Shaughnessey) and saves him just in time. Confused, Sonic must figure out what Knuckles and the evil Dr. are after before its too late.

Written by Pat Casey, Josh Miller, and John Whittlington, Sonic the Hedgehog 2 does what the first Sonic could not do, which is have a movie that features Sonic and his wild friends and not some boring humans. No, this time Tom is sent off to Hawaii (sitcom style), thus leaving Sonic to do the film’s heavy lifting. We do get to catch up with them at some point, but that time hurts more than helps as it is twenty minutes that could have been trimmed in a movie that feels a little too long. It’s a slight speed bump and about the only thing that can slow down this hedgehog as the rest of the film is pretty entertaining. The comedy has much of the same flavor as the first, with Jim Carrey once again having what appears to be the time of his life. He really goes all in as the villain and for me is the best part of the movie.

While Carrey might be the crown jewel, there are other things that Sonic the Hedgehog 2 has going for it. Which incudes outstanding visuals and the many nods to other films and of course easter eggs for fans of Sonic the game. Fan service though can’t save this Sonic from being average as the formulaic story and too often Carrey not being there to save a scene, takes this go around down a few notches. It also is a reminder  that bigger is not always better when it comes to sequels and while it will be a hit with the kiddos and a lot of the fans of the games, for me it was entertaining enough, and leaves hope that with the success of this Sega franchise maybe we’ll finally get an Altered Beast movie.