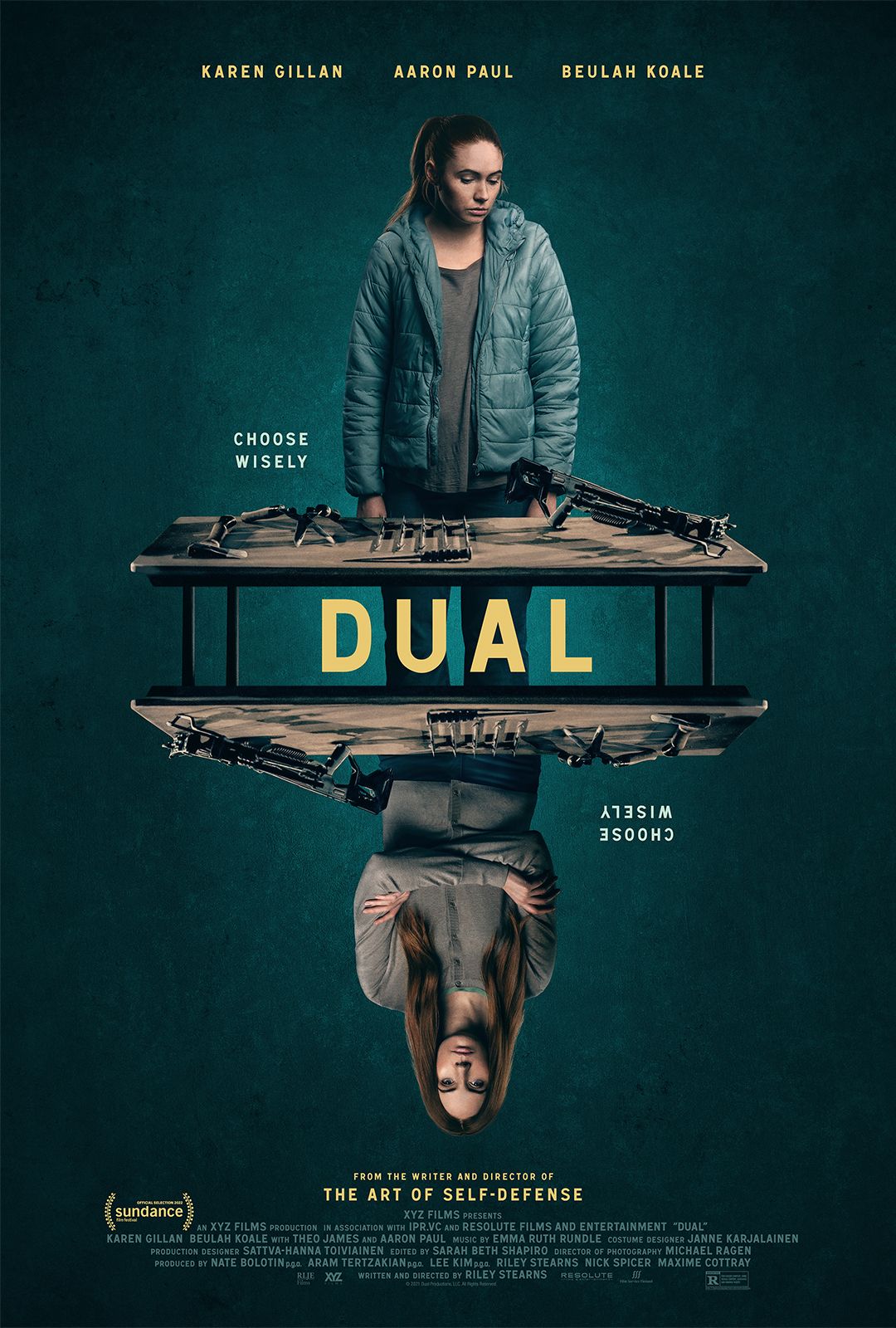 I am sure the thought of dying and leaving your family behind without you has crossed many people’s mind. What if instead of only being left with memories of your life with them, you could leave them with a replicated version of you? That is the idea behind Riley Stearns’s new film Dual. But then it goes way beyond that idea.

Sarah ( Karen Gillan) lives what seems as a pretty disconnected life. She lives with her boyfriend Peter (Beulah Koale) who is often gone because of work, while also having a pretty turbulent relationship with her mother. Her life is pretty ho-hum, but that changes when she wakes up one morning with her pillow covered in blood, which prompts a visit to the hospital. The news she gets is not good as she is informed that she has an incurable disease, which doesn’t seem to hit like you would think it would. Sarah then finds out about a procedure that will replicate her, thus giving her loved ones more time with her. The procedure is pretty quick and soon she meets duplicate Sarah, a near perfect replicant of herself, except this one has blue eyes instead of brown. For a discount she accepts her duplicate and together they go so duplicate Sarah can learn all about the O.G Sarah’s life. Things take a turn when both Peter and Sarah’s mom seem to be more keen on duplicate Sarah. They like her so much more that they replace Sarah with her, which forces Sarah to move out and even provide support for duplicate Sarah for the remaining time she is alive. Things become further complicated when Sarah finds out she is not dying after all, thus setting up her duplicate to get decommissioned. However the duplicate is not going to go quietly into the night and challenges Sarah to a duel to the death, where the winner earns the right to be the one and only Sarah.

Stearns who both wrote and directed Dual a cleaver sci-fi concept that seems only a few steps removed from our current reality. Sure, cloning isn’t at this point yet, but the rest of the place the story inhabits offers plenty of that real world flavor. While all of this sounds like a heavy drama, Steans’s style also encourages some laughter at the absurdity of what you are seeing, in which plenty of moments do that very thing. The shift from Sarah dealing with death from a disease to dealing with death at the hands of her replacement is as jarring and humorous as it sounds.

Dual is inventive, and kind of out there, yet it is grounded through very real emotions. The performances are good, but Gillan really shines as both the original and the copy with her deadpan delivery of Stearns dialogue. Both of the Sarah’s also surprisingly grow as characters and come to find out, what they both wanted originally isn’t what they want now. Most of the film’s flaws that show are mostly in the third act as the focus somehow shifts and it feels a little more loose with the narrative. Also not everyone will enjoy the character’s monotone performances, but for those who go for the ride will be glad they did. Overall though Dual explores the human condition and how we relate to each other. That mixed with its quirky humor make this a great watch.

Minions : The Rise of Gru