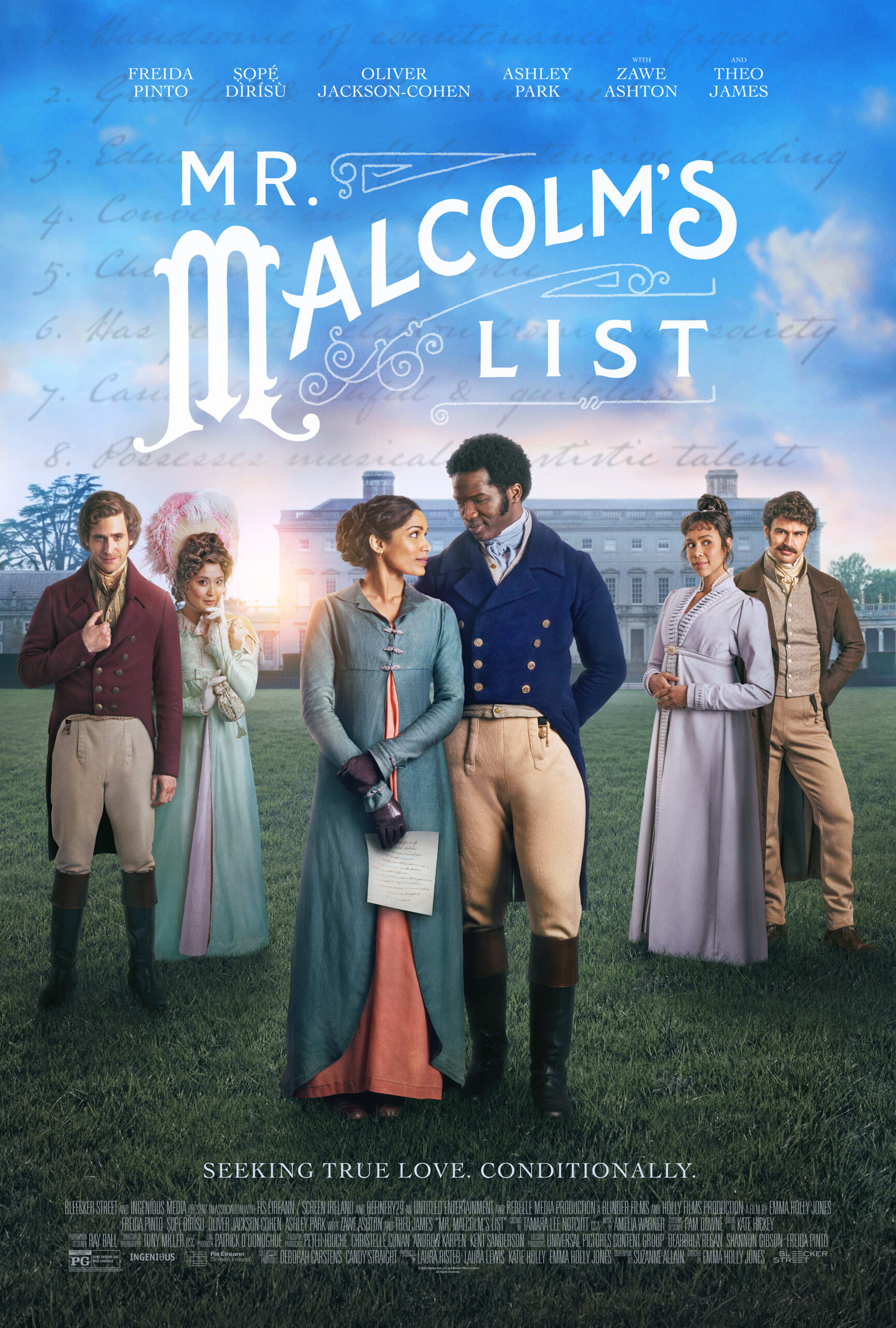 No matter what period one might be in, let’s face it, dating can be tough. Where swiping is the latest rage, there was a time when one would court who you were interested in, or as some might say, the good old days. Mr. Malcom’s List is a story about such a time and about one’s man’s pursuit for the perfect woman for himself.

Jeremy Malcolm (Sope Dirisu) is currently the more eligible bachelor in town and has quite a many women admirers who would like to catch his eye. There is no standing in a row waiting for a red rose here, no the women that Mr. Malcolm does give a chance to have to show certain qualities and not show others, in order to be the one. Julia ( Zawe Ashton) is one of those women and after accompanying Mr. Malcom to an Opera she fails to make the cut and soon becomes the butt of jokes after the miss match occurs. While not happy at the outcome, she soon grows angrier after herring from her cousin, Lord Cassidy (Oliver Jackson-Cohen) about a list that Mr. Malcom keeps of all the things he looks for in a woman. Going by the thought that you don’t get mad, but instead get even, Julia comes up with a plan that will do just that. With the help of her cousin Lord Cassidy, Julia enlists her friend Selina Dalton ( Freida Pinto)  to make that happen.

The plan you see is simple, they are to make Mr. Malcom fall for Selina and when he asks for her hand, she informs him of her list and how he doesn’t check all the boxes. With the plan in hand, Cassidy and Julia arrange a meet and so begins Julia’s payback for how she felt she was wronged. Things don’t go quite as planned as Selina and Mr. Malcom seem to be really falling for each other, so what will Julia do?

Written by Suzanne Allain from a short she wrote a few years ago, Mr. Malcom’s List  shows that Jane Austen doesn’t control a monopoly on rom-coms from this era. The story is ambitious in the way the cast who plays the characters in this world where there is only class and the sexes to worry about. Speaking of the cast they are wonderful, as the three main leads played by Ashton, Pinto, and Dirisu or overflowing with charm.

In a way Mr. Malcom’s List plays like a parody of other period dramas, and that is said in the best of ways. While it is not all a bed of roses as the movie does drag just a bit and feels like it could have cut a little from its almost two hour run time. Ultimately that drag is not enough to take away what Mr. Malcom’s list is, which is a delightful film that for a few hours puts you in a much simpler world than our current one. So get your chums together and pour a glass of tea and enjoy a movie that shows that not all lists are worth making.