When you have been reviewing movies as long as I have (over a decade), you tend to get worn out. Most films leave you going ‘meh’ and if it doesn’t have “Star Wars” in the title, or “Marvel” before the title I tend to not get very excited for much these days. So when I heard the words “Evil Dead II in the Woods” I was immediately interested and when given very little details about the event I would eventually attend on September 14th of this year, I was all in.

Being part of a collaboration between SYFY and Alamo Drafthouse they created the SYFY25 Screening Series which included a screening of “Robocop” at City Hall in Dallas, and one I would have loved to have attended, “Close Encounters of the Third Kind” at Devil’s Tower in Wyoming. 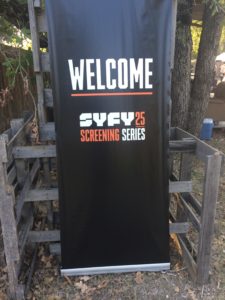 Watching “Evil Dead II” in the woods was enough for me to be excited for. Even if the second in this series of Ash (Bruce Campbell) verses an evil force released from the Necronomicon the book of the Dead is not my favorite, that falls to the third film “Army of Darkness” where both director Sam Raimi and star Campbell really found their groove in their humor and horror campiness which made the character of Ash an icon and Campbell a B-SuperStar. 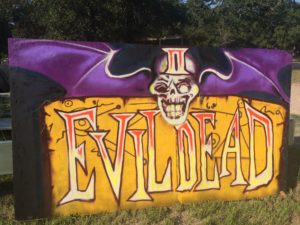 What made the event even more special was not only the film in the dark with fellow fans, but the King himself was in attendance. That’s right Bruce Campbell! He arrived late afternoon to sign copies of his new book, “Hail to the Chin: Further Confessions of a B- Movie Actor” which was included with the price of our $50 ticket. He also signed other memorabilia brought by fans, so there was posters, DVD copies of his films, and chainsaws, oh the chainsaws. One girl in front of us got Bruce’s signature on her arm which she would be turning into a tattoo, that is some fandom right there. 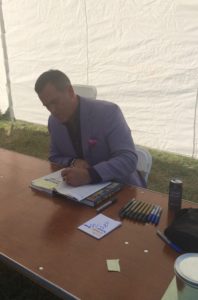 The man signed for several hours in a blazer and pants in the Texas heat, and still managed to be very entertaining in a Q & A before the film later that night. He is was a true gentleman and it is crystal clear that he loves his fans. He commented on that he is blessed that his level of fame keeps him employed but not so insane that people are going through his trash or stalking him. He gave some insight as well on the inconstancies of the trilogy of “Evil Dead” films. I mostly chocked it up to Raimi and crew not believing they would make another one, so logic, even movie logic went out the window. His tip was to watch all three films with skipping over the recap scenes which made for a clearer follow through. In all honesty, it doesn’t really matter, these are silly movies that are intended to be pure fun. 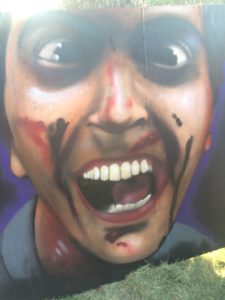 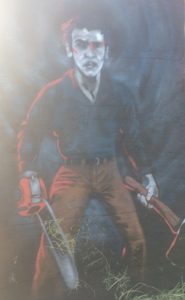 And it still was, despite being packed a bit like sardines, the movie was still a fun sit and as everytime I have watched it in years past, it always leaves me wanting to re-watch “Army of Darkness” where things truly get ‘groovy’ with Ash and his ‘boom-stick’ while getting some ‘sugar’ from the local princess.

So thanks to SYFY, Drafthouse and of course Mr. Campbell for a one-of-a-kind experience!