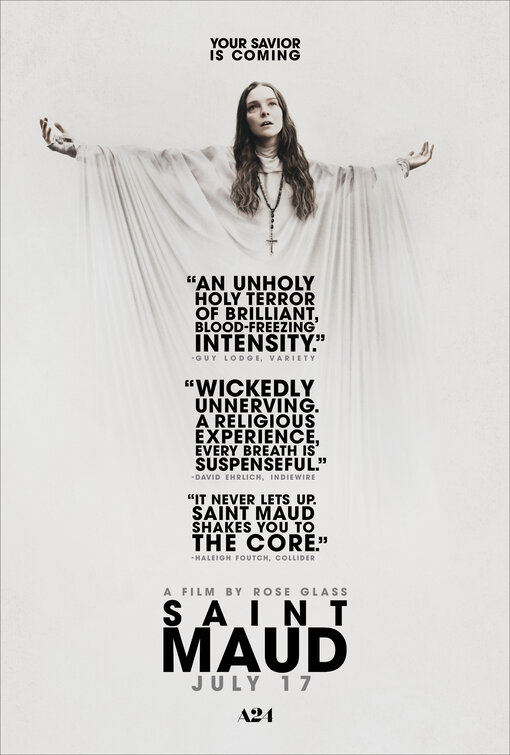 Horror films have used God, religion, and the evil around us to their benefit since the dawn of their creation. With that said writer/director Rose Glass is not diving into uncharted waters here, but with Saint Maud she has delivered something that hits on all three and will you will be in shock and awe at what you see.

Maud (Morfydd Clark ) is a nurse with a past that we know little about. What we do know is she worked at a hospital and some kind of accident happened that caused her to no longer work there. So when ever one door closes you find another one and now Maud is a home nurse who is assigned a patient to care for. For her first gig she is assigned Amanda (Jennifer Ehle), a once famous dancer whose body has been ravaged by terminal cancer. Maud, who believes God is talking to her directly not only wants to take care of Amanda’s physical needs, but also wants to save her soul from damnation, even if Amanda doesn’t want saving. Things at first go smooth with at times Amanda being open to what Maud is trying to do, but then things take a turn the night of Amanda’s birthday party. It is then when Amanda starts to ridicule Maud and her beliefs and in a moment of anger Maud strikes Amanda, thus ending her employment and ending her quest. Having no direction Maud drifts around town looking for it and even tries to find it in men and alcohol before she is shown the way again. In Maud’s mind she has just one thing to do and that is to save Amanda’s soul and when she has done that, God will call her home for the righteous act she has done.

For quite some time now I have been waiting for Saint Maud to grace the screen of my local theater and my wait is finally over. So with my personal hype built up, this film did not disappoint and Rose Glass has made one hell of a film. The beauty of Saint Maud  is that is does nothing heavy handed and instead hits you with flashes of its true message. The story just has the perfect pace with some stunning imagery that all concludes with an ending that will leave you speechless. It’s not just Glass behind it all as both Clark and Ehle are magnificent in their roles as the savior and sinner. This though is not just a story about faith as it also explores depression, loneliness, mental breakdown and the effect all those can have on a person. Saint Maud is not just a horror film as it is also a psychological drama that will have you believing nothing is going to shock you, until it does. Glass doesn’t tell you what to believe, she lets you make up your own mind on what you think is happening, before the ending that leaves no doubts. I love this film and it’s been worth the wait, something I am sure you will agree with after seeing.