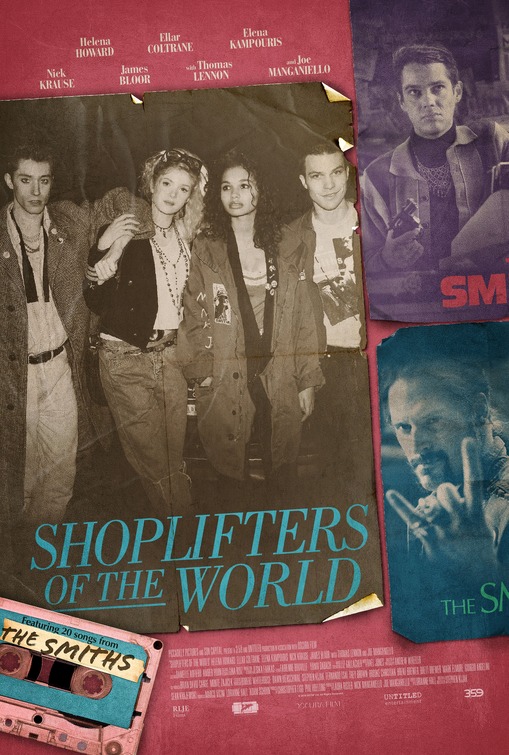 In 1987 the British band The Smiths called it quits and broke a lot of teenagers hearts. For superfan Dean (Ellar Coltrane) he decides that sitting alone in his room mourning the loss of his favorite band wasn’t enough and for them he needed to do something that would live in musical infamy. Based on what the film labels as “intended events” Stephen Kijak’s Shoplifters of the World looks at what could have happened if James Kiss, the person Dean is based on, actually didn’t lose his nerve and followed through with his plan.

Kiss of course did not and even turned himself into the police for the thing he was only thinking of doing. The story would have been much better if he had, so this is the story about if he did make that move. On a normal night in Denver, Cleo (Helena Howard) is preparing to meet with her friends to celebrate the last night of freedom for one of the crew, before he joins the army. As she leaves Cleo gets the news that The Smiths are breaking up, an event she did not see coming. Of course she is devastated and on the way to pick up her friend Billy (Nick Kraise) she sheds a few tears and she listens to their music.  Billy is the one who is joining the army and together him and Cleo pick up Shelia (Elena Kampouris) and Patrick (James Bloor) a couple that are having their own issues. While this fab four makes their plans for the night, Dean armed with a gun is arriving at the radio station. He interrupts metal night which is hosted by aptly named ‘Full Metal Mickey’ (Joe Manganiello) and informs Mickey that he will be playing nothing but The Smiths the rest of the night. Shoplifters of the World is a loving tribute to The Smiths, going hard with its needle drops of their biggest hits as well as some deep cuts. Kijak, who wrote the story with Lorianne Hall even interweaves song titles and popular lyrics into the dialogue all to show off their knowledge of the band’s songs. This of course is intended to show how some fans might communicate their love for a band in a language that only someone like them might know.

While Dean is proving his love by holding a disc jockey hostage, Cleo and her friends are living out their sadness of the news by crashing parties and playing their music through any means they can. Of course Metal Mickey and Dean get past how they met and soon Mickey is opening his ears to Dean’s problems as well as The Smiths’s music. Kiss of course never achieved musical infamy, which the film honors by never really becoming even an average movie. The star of the film is of course the music, which as you can guess is provided by The Smiths. It is after you get past that, that you realize that you are watching something that never really has characters that become fully developed. It is even difficult to see what would even make each of their passions for The Smiths even possible, except a difficult homelife in Cloe and sexual questionings by another character. Other than that it is hard to figure out why they would be invested in this music so much. It is because of that that I couldn’t really get behind this movie and while the cast does inject some life in it from time to time, it is not enough to make you enjoy this movie for anything more than its soundtrack.