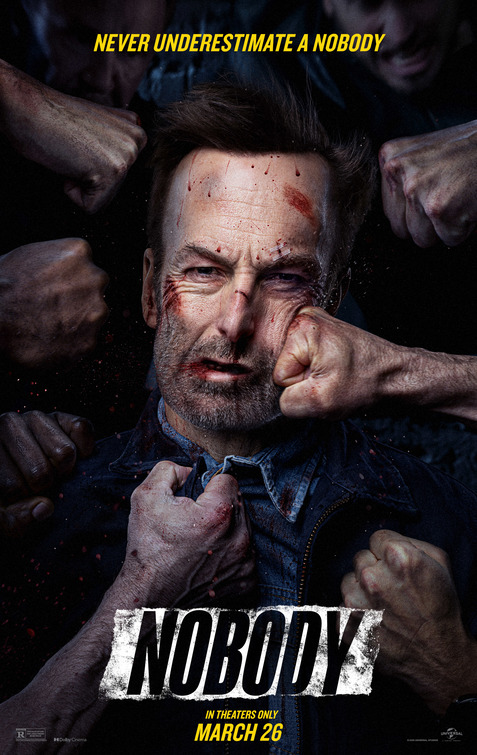 Who is Hutch Mansell? If you ask him he will tell you he is nobody. Who Hutch is though is what you would call a regular Joe. Every day he wakes up and does the same routine Monday thru Friday, kiss the wife and kids goodbye, rides the bus to work and comes home at the end of the day. Hutch’s life is so boring, you wouldn’t even have to guess what his job is, yes, you are correct he is an accountant. The regular Joe act almost breaks when Hutch’s house is broken into and reveling that Hutch might not be who we think he is.

Written by Derek Kolstad (John Wick) and directed by llya Naishuller (Hardcore Henry) or what you would call a match made in heaven, you can pretty much see where this movie is going. After the break in, Hutch (Bob Oldenkirk) lets the two who do it get away, even when he had the drop on one with a golf club. Seeing the look of disappointment in his son’s eyes, Hutch plans on just to keep living, but then he finds out his daughter is missing her favorite kitty bracelet. Something clicks in Hutch’s head and all of the sudden he starts looking for the two robbers that he let go. You think you are about to see things go bad for these two, but you see Hutch step back and just go back home. His night is just getting started when a group of hoodlums get on his bus and start harassing the other riders, which causes Hutch, in his words “want to fuck them up.” Bones are broken and Hutch sends all of them to the hospital, but you know how it is, everybody knows someone. One of the punks is the brother of a very bad dude, so things are about to get kick into high gear for everyone involved.

Nobody is what you call an action movie firing on all cylinders. Coming from the same writer as John Wick  you would expect that and your expectations are about to be met and then some. Unlike Reeves, who had some action movie street cred, Odenkirk is known for his comedy and of course playing everybody’s favorite lawyer Saul Goodman from Breaking Bad and Better Call Saul. That preconceived notion of the pudgy schlub just might change after you see this, as Odenkirk shows off some particular skills and proves he is not there just to amuse you. Nobody checks all the boxes when it comes to action. It has an incredible car chase, fist fights,  great needle drops, and lots of gun-toting battles and when the smoke clears lots of bad guys not living anymore. It all comes to a head in a climactic finish where Odenkirk is joined by two others that without giving them away, is the cherry on the top of this delicious desert. Coming in at a cool ninety minutes this feels less like a rip-off and more like what I hope is the first of a few films in this universe, because like Wick it proves simple is all you need sometimes, and Nobody is simply: a hell of a time!

Shoplifters of the World