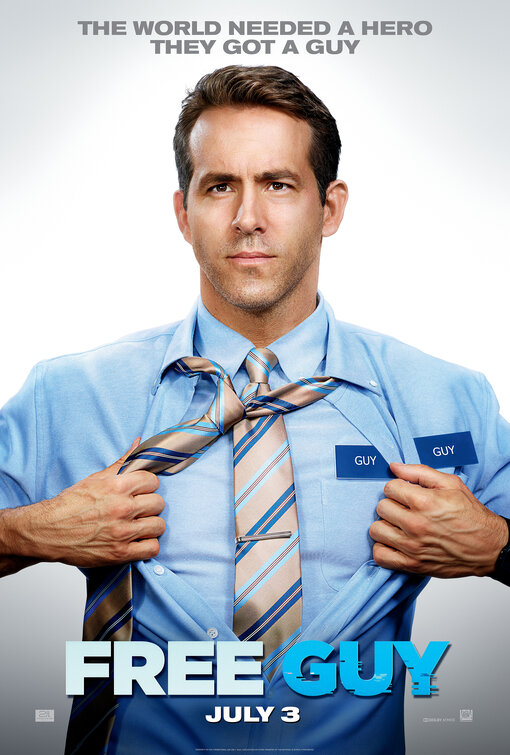 After what seems like forever we finally get to see more than the two plus minutes of Ryan Reynolds’s new film Free Guy. Having fallen victim to the pandemic Free Guy is here to be put in our eyes and while this video game world will inspire good feelings, for me it just made me question what I was feeling.  In this world Guy (Ryan Reynolds ) is a bank teller whose life is about as mundane as you can get. He wears the same outfit every day, drinks the same boring coffee, and even experiences a bank robbery, every day. Even though Guy ends each conversation with telling people to “don’t have a good day, have a great day” , he himself is about to see what a great day really is.

While on a walk to work with his best friend Buddy (Lill Rel Howery) he sees Millie ( Jodie Comer) for the first time and something clicks inside his mind. It is in that moment that he wants to “change it up” a little. It is this day he grabs a different shirt and pants, (although same color) and almost shorts out the barista with his cappuccino order, but it’s when he stops the bank robbery and gets his hand on a pair of sun glasses that things really take off. When you have Ryan Reynolds in your movie, you are going to get Ryan Reynolds, and it is his portrayal of Guy gives you that warm fuzzy feeling but it also gives Free Guy the best thing it has going for it. I don’t know if it was because I saw the trailer what seemed like a thousand times, but I was really left with no surprises and that was sad. Sure writers Matt Liberman (Scoob) and Zak Penn (Hulk) put in some great video game easter eggs, but real gamers might feel a little offended, because of how it was presented. Where the story gets it right is the overall message that you can be what you want all while just being a nice guy.

The fun with Free Guy  really kicks into gear when after talking to Millie, Guy is told that he needs to “level up” in order to get with her. It is for Millie that Guy then goes and does the things that helps him get to her level, but not by killing and doing bad things, but by being a good guy overall and helping people. As Guy is doing this the real world is where the problems are really brewing. Antonine (Taika Waititi) is the guy who owns Free City and while at first he likes Guy and the attention he brings, he soon realizes that there might be something more going on. Free Guy  has a lot to like about it, but it doesn’t come without its flaws. It does deal with some heavy subject matter, however, does so in a light manner. Instead what it mainly choses  is to entertain you, and it does that in its bubble gum kind of way. If this was a real game it would be one that you would tire of playing after a short while, but still feel good that you got to experience it. After all you get a non potty mouth Reynolds, who instead of dropping “f “bombs instead fills your heart up. I enjoyed this enough, but the countless trailers I saw did hurt my enjoyment a bit. While I feel I was over saturated, I would tell you go into in as blind as you can, because you might just see a little more than what’s on the surface.