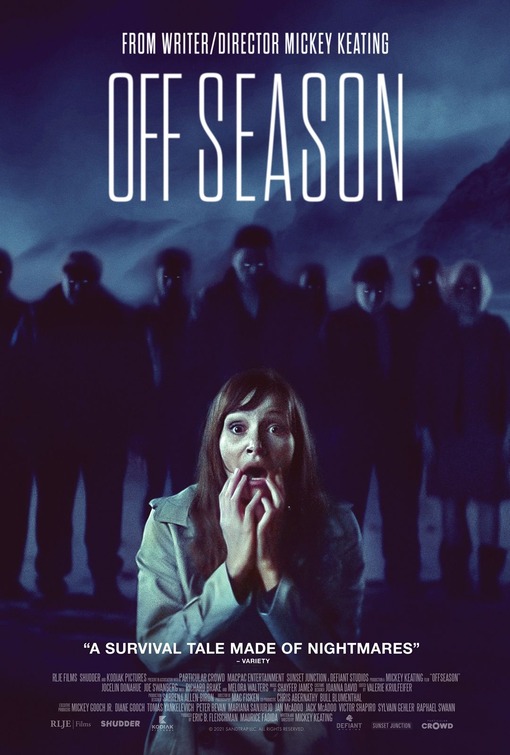 When you are looking for that perfect mate they say you should look for someone who will look at you like a zombie looks at brains. While that might sound sexy to some, I say look for someone who will go with you to a creepy island at the last minute, that is love.  That is what Marie (Jocelin Donahue) has in George (Joe Swanberg) after a letter arrives asking for Marie to come immediately for an urgent matter concerning her mother’s grave.  What seems like an nice gesture turns out to be a bad decision all the way around.

Marie and George are trying to get to this island before a storm hits and they are not able to get back to the mainland. When they arrive they head straight for the cemetery and it doesn’t take long for something strange to happen. Marie decides to power though the strangeness and her and George find the local diner that some of the town’s residents are enjoying an adult beverage and some music. Marie hits them up for information on the cemetery’s caretaker, but no one is eager to lend a hand. Fed up with the lack of help, her and George leave and while in the car, that’s where Marie tells the story that her mom told her before she died. One involving the townspeople and a demon, then the coming storm gets so much worse.

Written and directed by Mickey Keating, Offseason is a very Lovecraftian style horror film that has some things working for it, even if the results as a whole don’t completely stick the landing. Some of the problems is there is not a lot of fear happening here, neither in the movie generating any or the characters acting quite scary enough. Instead some of them come off as creepy, but only to the point where you just don’t want to be around them.  By the time you get to the end and so little has happened, you half believe something might jump on the screen to give you a little jolt, but of course that doesn’t happen.

Offseason never really did anything for me, as I spent most of my time thinking of all the bad decisions Marie was making. And not in that fun horror movie kind of way. I wanted there to be something to be scared about, but instead of jump scares Offseason relies on making you feel claustrophobic and dread, neither giving you a reason you can’t sleep at night. This is definitely a pale imitation of better works of horror, but there will people out there who will enjoy this based on the tone and atmosphere, I just wish I was one of them.